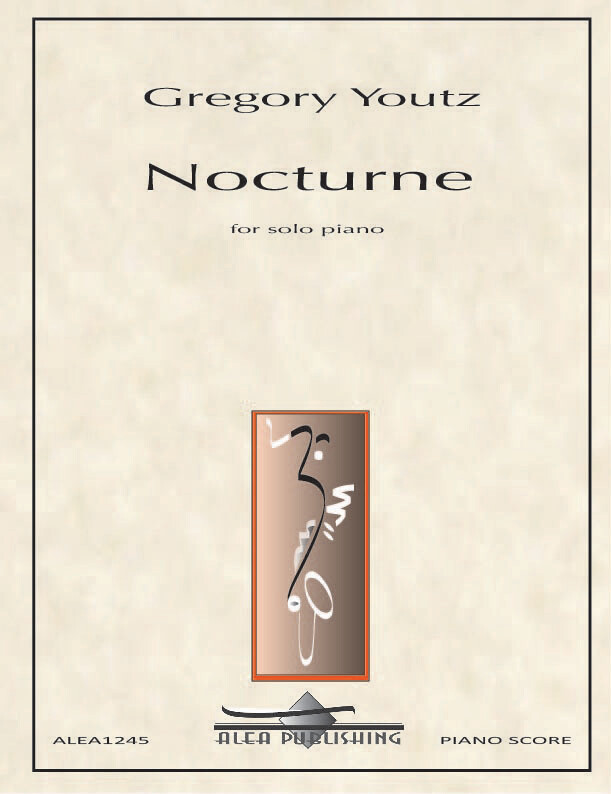 Nocturne for solo piano is based on motives from Kurt Cobain’s song with Nirvana, Smells Like Teen Spirit. The unifying features are the rising fourth - both melodic and harmonic, the perfect fifth interval, the four-chord progression of the verse F-Bb-Ab-Db, the progression of the chorus F-F#-Bb/B-Ab, and the rhythm short-short-long. In form the piece is a typical three-part Nocturne: quiet-energized-quiet with respective feelings of sadness, increasing power and anxiety, and then sadness again.

Players should familiarize themselves with a recording or video of Nirvana playing the song so as to understand the style, alluded to by this piano composition. The use of low registers is intended to evoke the "grunge" sound of the bands of that era. Pedaling is indicated in detail- washes created by the sustain pedal, occasional uses of the sostenuto pedal, etc. Nocturne uses a lot of "extended techniques" - sounds created by playing inside the piano - striking, plucking or scraping the strings, or damping a string which is played on the keyboard.

American composer Gregory Youtz received his Doctorate in Music Composition from the University of Michigan in 1987 where he studied with Leslie Basset, William Bolcom and William Albright. His compositions include two symphonies, a full-length opera, and numerous other works for orchestra, wind ensemble, choir, and various chamber ensembles.