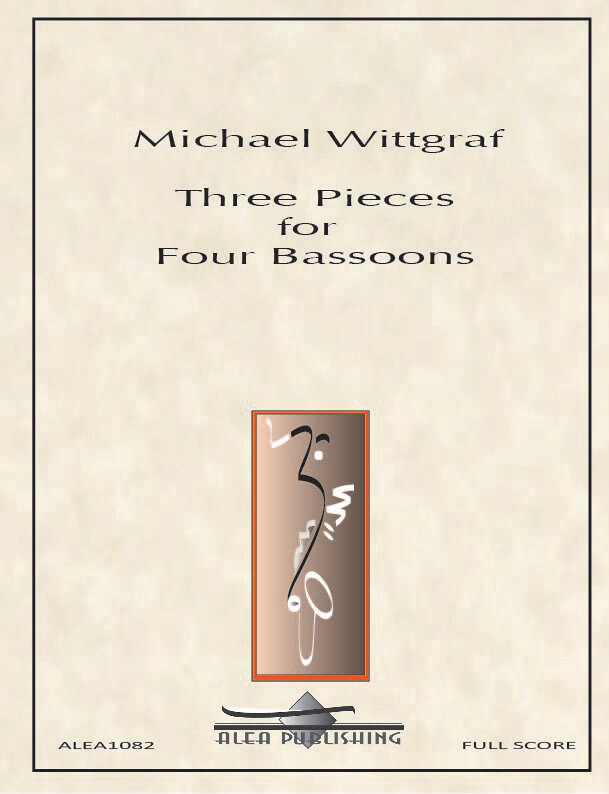 Three Pieces for Four Bassoons was composed in 2003 for Jeff Womack and the bassoon quartet Depraved Indifference. The first piece, Canon, begins with a short, imitative introduction, followed by a lengthy canon at the unison where each voice enters one quarter note after the previous note. The resulting texture allows for the exploration of various intervals, rhythmic patterns, articulations, and dynamic effects. It is approximately four minutes long. The second piece, Chorale, resembles a traditional chorale only in that it has a melody and chords. Its primary feature is its use of quarter tones. It is about two-and-a-half minutes long. The third piece, Fantasy, is freely constructed to showcase a wide variety of bassoon capabilities, including wide ranges, virtuosic speed, agile leaps, expressive melodic work, and special ensemble effects. The last movement is approximately nine minutes in length.

Michael Wittgraf earned the D.Mus. in composition from Northwestern University, the M.A. in music theory and composition from the University of Minnesota, and the B.A. in mathematics from Carleton College. His composition teachers include Dominick Argento, Andrew Imbrie, M. William Karlins, Alan Stout, Jay Alan Yim, Alex Lubet, and Phillip Rhodes. In 2005 he served as Dayton-Hudson Distinguished Visiting Professor of Music at Carleton College. Currently he is Professor and Chair of the Department of Music at the University of North Dakota. He specializes in composition, theory, technology, and bassoon. Prior to 1998 he served on the music faculties at Northwestern University and St. Mary's College.

Dr. Wittgraf has won the University of Minnesota Craig and Janet Swan Sesquicentennial Commissioning Project. Additionally, his music has received special distinction in the ASCAP/Nissim Foundation Composition Contest, and he has been a finalist in the Ladislav Kubik International Prize in Composition, the Modern Chamber Players International Composition Contest, and the Pi Kappa Lambda Chamber Music Composition Competition. His music has been performed by many artists, including Zeitgeist, Trio Montecino, the Chiara String Quartet, the BECS Quartet of the National Symphony Orchestra, the Minnesota Orchestra, the University of Minnesota Symphony Orchestra, Thursday Musical of St. Paul, the University of North Dakota Wind Ensemble, the DuQuesne Contemporary Ensemble, and Tempus Fugit.

Dr. Wittgraf has been commissioned through the National Symphony Orchestra, the North Dakota Council on the Arts, the North Dakota Music Teachers Association, The Greater Grand Forks Symphony Orchestra, and many other organizations, ensembles and performers. He was named the 2011 North Valley Arts Council (North Dakota and Minnesota) Artist of the Year. He was the commissioned composer for the National Symphony's North Dakota Residency in 2003. He has won grants from the Bush Foundation, the North Dakota Council on the Arts, The American Composers Forum, and the American Music Center. His catalog contains over sixty works, and includes music for orchestra, band, choir, chamber ensembles, solo instruments, voice, and electronics. His music has been performed in North America, Europe, and Australia.