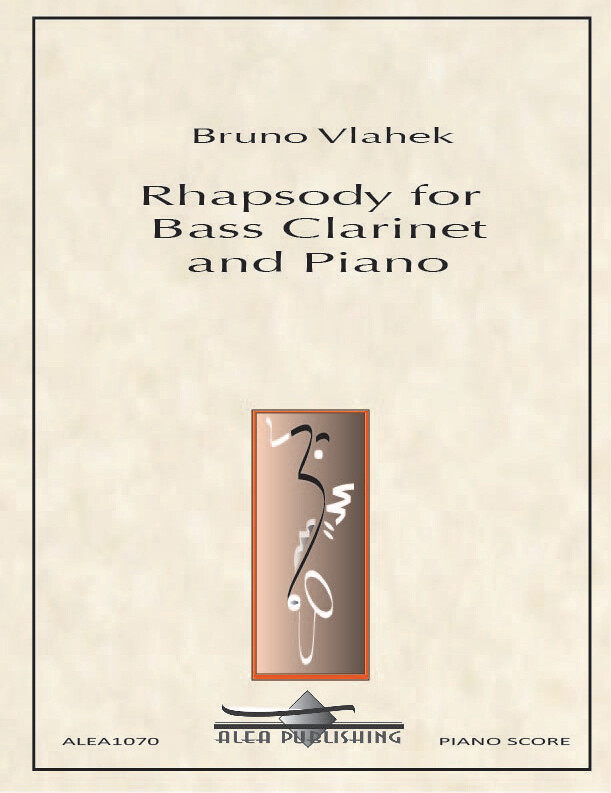 The single-movement Rhapsody (2010) is an outstanding new addition to the chamber music repertoire for bass clarinet and piano. The work, which builds on a simple beginning through several episodes to a dramatic conclusion, would make an excellent contribution to a recital program.

Throughout the work's duration of approximately 11 minutes, the writing for both instruments is very well constructed. The work provides truly equal challenges for the two performers, and there are many details of dynamics, phrasing and tempo changes to be rehearsed. That said, there are no modern performance techniques or extremes of range to navigate.

Bruno Vlahek (b. 1986) is one of the most prominent Croatian artists of his generation. Discovered as a specially gifted musician, he enrolled in the Music Academy of the University in Zagreb at the age of 15. He graduated piano from the class of Prof. Vladimir Krpan in 2005 as one of the youngest students in history of that institution. As a Federal scholarship holder of the Swiss Confederation, in 2008 he obtained a piano soloist diploma with distinction at the Conservatoire de Lausanne, and now is continuing his studies at the Hochschule für Musik in Cologne.

Beside being an absolute winner of Croatian national competitions in 1999 and 2001, he was a prizewinner at several international piano competitions in Italy, Norway, Spain, Switzerland, and most recently, was the winner of the Scriabin Competition in Paris. He is regularly invited to perform as a soloist in many European countries, and frequently takes part in eminent music festivals. His concert appearances have been broadcasted on TV stations in Croatia, Hungary, Montenegro, Russia and Spain, as well as on Radio Suisse Romande.

As a composer, he has written about 30 works of various genres, with special emphasis on piano and chamber music. His music has been critically acclaimed and has been performed throughout Europe.