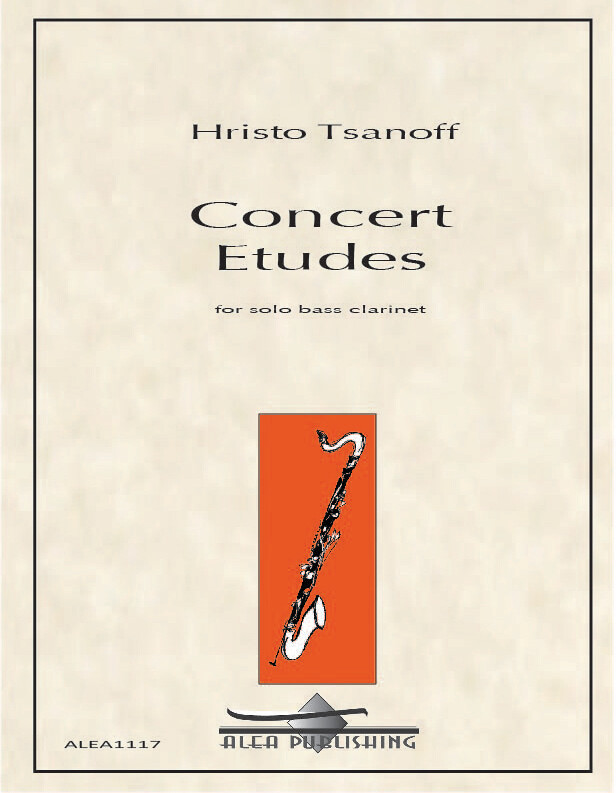 The seven Concert Etudes for solo bass clarinet (2014) belong to a cycle of Etudes for various instruments, titled "Play of the Thought," which provide performers with challenges suitable to prepare them for the repertoire of the 21st century.

Dr. Tsanoff was motivated to include works for bass clarinet in his cycle to refute the notion that the bass clarinetist should not be expected to handle technically demanding works. The composer also believes that music of the 21st century will increasingly utilize irregular meters, therefore creating the necessity that performers are able to handle such irregular and changing meters to perfection. He has heard many capable and expressive soloists who "become helpless as a child" when confronted with such material, and so this features prominently in these Etudes. Additionally, the final etude in the volume includes alternating passages written in B-flat and A, encouraging practice of transposition.

Dr. Hristo Tsanoff, DM, is a Bulgarian composer. Born in 1947 in Sofia, he studied the violin, piano, and composition in his youth, in addition to studying medicine and spending much of his life working as a military doctor. His diverse and prolific compositional output includes operas, sacred music, symphonies, violin, 'cello, and piano concertos, as well as the extensive "Play of the Thought" cycle of Concert Etudes for various instruments and ensembles.

For more information about the composer and his works, visit his website!