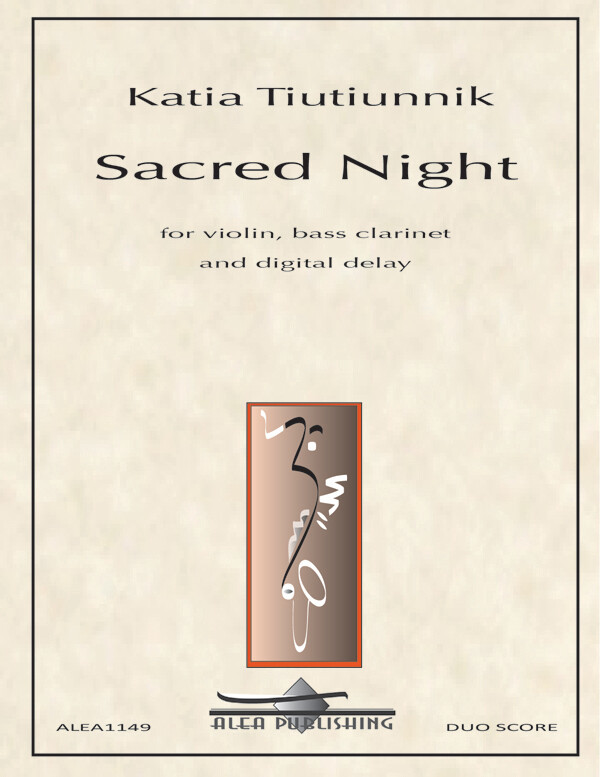 Sacred Night, a brief single-movement work by Australian composer Katia Tiutiunnik for violin, bass clarinet, and digital delay, was composed in 2014. The work is dedicated to Roger Vigulf and Ricardo Odriozola. The piece is imitative in nature, with the interplay between the two instruments then augmented by the digital delay. The bass clarinet part does not include any modern techniques, nor does it require an extended-range instrument. Likewise, the technical challenges for the violinist are modest for an experienced player, making this duo work quite accessible.

Katia Tiutiunnik is a composer and scholar who has mastered several languages as an adjunct to her research. Tiutiunnik was the first Australian composer to be appointed visiting scholar at Columbia University, New York. She was also the first Australian to complete a residency at Charles Morrow Productions, New York, where she composed a work for three-dimensional soundcube, presented in Cologne, in November 2005. Most recently, she was a Senior Lecturer in Composition at the Faculty of Music, Universiti Teknologi MARA, Shah Alam, Malaysia, from March 2012 until April 2016 (after which she declined the offer of a futher extension to her contract there) and an Honorary Research Associate at Sydney Conservatorium of Music, the Univesity of Sydney, from June 2010 until June 2016. During the latter half of 2016, Tiutiunnik was appointed Professor of Music at SIAS International University, Xinzheng, Zhengzhou, Henan, China.

Tiutiunnik has been awarded numerous international travel grants, commissions and other sponsorship from the government and private sectors. Tiutiunnik earned her PhD from the Australian National University and was awarded the highest Italian postgraduate diploma from the Accademia Nazionale di Santa Cecilia, Rome, where she studied with Franco Donatoni. She obtained her BMus from Sydney Conservatorium, where she was awarded all three of their composition prizes. In December 2009, Tiutiunnik's PhD dissertation was published and released internationally. Besides Franco Donatoni, Tiutiunnik's former composition teachers include Michael Smetanin, Larry Sitsky, Gillian Whitehead, Bozidar Kos and Richard Toop.

Tiutiunnik's music has been performed in Australia, Brazil, Bulgaria, China, Germany, Greece, Italy, Jordan (including a historical performance of a symphonic poem dedicated to Queen Noor of Jordan, in September 1999 as part of the 28th General Assembly of the International Music Council), Malaysia, Poland, Russia, Serbia, Thailand the UK and the USA. Tiutiunnik has lectured worldwide and her works are held in important international libraries, including the Bodleian Library at Oxford University.

Presentations on Tiutiunnik's music have been given by Professor James Bicigo (of the University of Alaska Fairbanks), in Australia and the USA. Tiutiunnik's music has also been used for theatrical productions in Australia, the UK and the USA. Commercial CD recordings of her work include those by Laura Chislett, Stephanie McCallum and Borealis Brass of the University of Alaska Fairbanks. Forty live and studio recordings of her worked are commercially published by Alexander Street Press, as are over thirty five of her scores. Other publishers include TauKay Edizioni Musicali (TEM), Italy and Charles Morrow Productions.

In December 2009, the historic 'Borealis in Australis' tour featured over ten Australian performances of Tiutiunnik's compositions, by Borealis Brass of the University of Alaska Fairbanks. Borealis Brass also completed a historic tour of Tanjung Malim, Shah Alam and Kuala Lumpur, Malaysia, as a guest of the Faculty of Music, Universiti Teknologi MARA (where Tiutiunnik is a Senior Lecturer in Composition), Universiti Pendidikan Sultan Idris UPSI) and Yamaha, Malaysia.