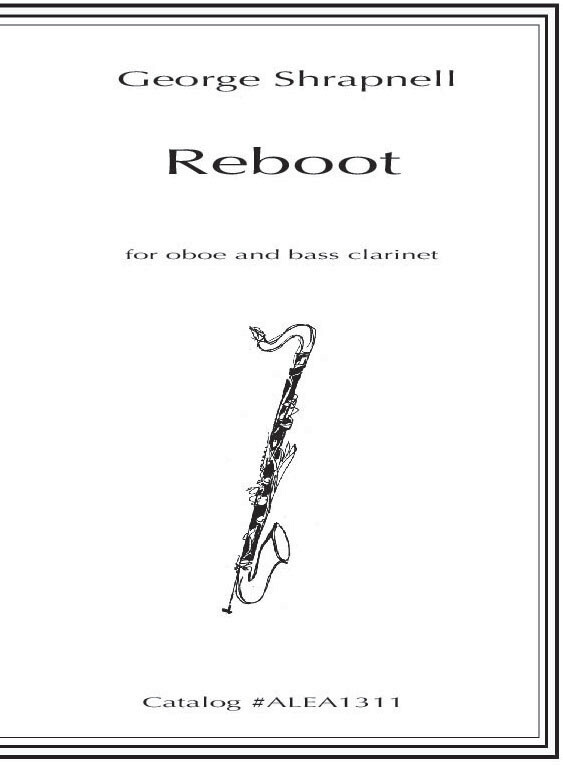 We thank the composer for sharing these words about Reboot for oboe and bass clarinet.

The title of this piece comes from the UK Government's 'Rethink, Reskill, Reboot' campaign - quite frankly an insult to all artists from all creative backgrounds. The word reboot typically is used in conjunction with computers when reloading the operating system and thus - start it up again. Normally this only occurs after a computer has crashed in which case it stops because of a malfunction. This short piece draws on the connotations with the word reboot and therefore has both a very relenting nature in busy alternating metres (which highlights the chaos of a malfunction and unease), whilst the connotations of reloading is drawn upon in the slower, and more unpredictable section of the music - featuring an eery multiphonic presense.

Further unease and dischord is created by the extended techniques, one of which I mention above - multiphonics. Other extended techniques deployed in this piece include: growling, and slap tongue (bass clarinet). Having never written for oboe and bass clarinet in a duo environment before, this piece represents a somewhat exciting challenge to myself to uncover and explore the possibilities of what these two sound worlds can achieve.

This piece would be a good way in for performers wanting to get to grips and gain confidence with contemporary music and performance techniques. The extended techniques within this piece are safely within 'traditional' notation, and as such, offers a good starting point for breaking with tradition! Performance time: Between 3 and 4 minutes.

Extended range instrument NOT required for bass clarinet part. Publication sold with two copies of the duo score, one for each performer, loose-leaf to facilitate page turns.

Listen to the world premiere recording:

Born in Winchester, England, George Shrapnell studied his undergraduate degree at Goldsmiths College, University of London where he graduated with First Class Honours. He specialised in performance, composition, jazz arranging, and orchestration under Paul Bartholomew, and Mick Foster. As a saxophonist, he is now studying for his MMus and MPerf under John Harle, Mick Foster, Alastair Penman, Nick Moss, and Scott Stroman, at the Guildhall School of Music and Drama where he was recently awarded the concert recital diploma for excellence in his final recital. Active in the fields of jazz, theatre, classical, and contemporary music - George enjoys and takes pride in being as versatile as possible as a musician in the 21st Century, facilitated by a portfolio career consisting of performing, composing, arranging, and teaching.

Based in New Cross in SE London, he is a freelance Saxophone and woodwinds player, and plays all the saxophones, clarinets, and flutes. This has lead to work in big bands, contemporary music, orchestras, and musical theatre, all of which he regularly plays for as part of his freelance work in and around London. He is also a session musician, recording woodwinds for engagements such as adverts, function bands, EP's (his own and colleagues'), and demos for original compositions. George has felt very privileged to have worked/performed with the likes of Cat Stevens, Pete Long, Tim Garland, Mark Anthony Turnage, Marin Alsop, and Labi Siffre. All of whom have made a positive impact on shaping his development as a musician.

As a composer and arranger, George writes from the heart and does not just write music for the sake of it. Melody, rhythm, and harmony all take a high priority when composing, he is particularly influenced by jazz, folk, minimalism, as well as sacred and secular choral music, and each of these influences can be found in much his work. He writes for a wide plethora of instrumentations and ensembles, and has a passion for expanding the repertoire of combinations of instruments that are seldom written for. He also writes for saxophone quartet, flute choir, clarinet quartet, works for multiple keyboards, percussion ensemble, big band, choral music, and smaller duo ensembles. Enjoying a diverse spectrum of music, George does not confine himself to one style of music either when performing or composing. He also arranges for varying ensembles and clients however and whatever is required in the brief.

Also a passionate teacher, George has held a number of peripatetic teaching posts and private pupils across South East London, covering all manner of music making and learning, such as beginner clarinet, flute, saxophone, and piano, initial music theory, and early years musicianship.