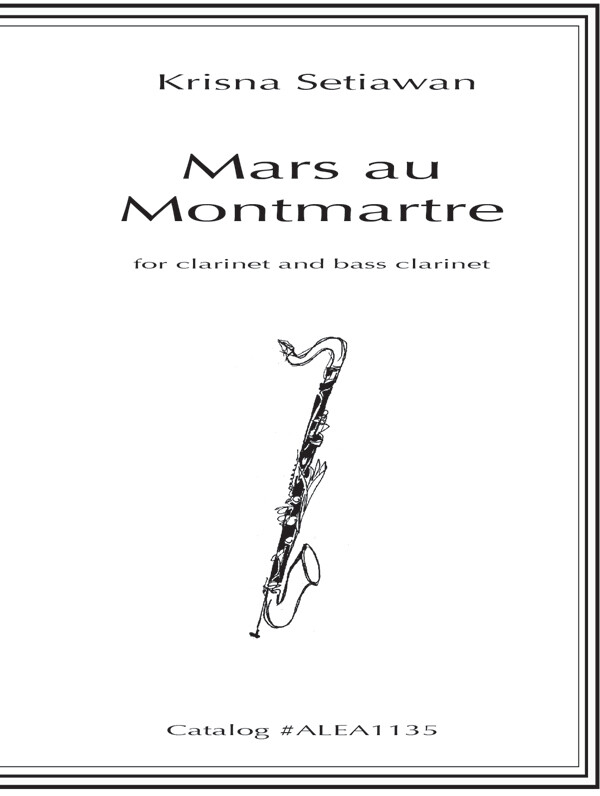 We are delighted to add to our catalog Mars au Montmartre (2015) by Indonesian composer Krisna Setiawan, making the work of this important composer available to a wider audience. Mars au Montmartre is a single-movement work for clarinet and bass clarinet. The dramatic duo features a rhythmically intense counterpoint between the two instruments. No extremes of range are expected of either performer. We publish the work with two scores, one for each performer, in loose-leaf format to avoid page turns. Extended-range instrument NOT required.

Krisna Setiawan is one of Indonesia's most active composers and pianists. Born in Surabaya, he studied classical and jazz piano, the latter with renowned Indonesian jazz pianist Bubi Chen. He made his concert debut at Goethe-Haus by invitation of The German Cultural Centre. His skills have since been recognized internationally with invitations to perform in Hue (Vietnam), at the Wittenberg University (The United States), at Bachforum Plettenberg and St. Dionysius Dortmund (Germany).

As a composer, Setiawan studied music analysis and composition with Slamet A. Sjukur, a pupil of Olivier Messiaen and widely regarded as the leading figure in Indonesian contemporary art music. Setiawan is at the forefront of the emerging trend of multicultural music, which aims to seamlessly interweave traditional Asian techniques, instruments and motifs with classical Western methods. He is responsible for the development of distinctive pentatonic scales, which replicate the musical landscape of the West and East.

Setiawan was funded by The Prince Claus Foundation to participate in a composer's workshop at Jeunesses Musicales Deutschland in Weikersheim, Germany by invitation of Professor Dieter Mack. He remains the first and only composer from South East Asia to have been invited to the Visby International Composer Centre in Gotland, Sweden as a composer-in-residence. In recognition of this seminal achievement, his works have been archived by multiple music libraries and universities such as Austrian Composer's Association (AKM/AustroMechana), Wittenberg University, Museum Musik Indonesia, Universiti Teknologi Mara in Malaysia and Gaudeamus Muzik Centruum in The Netherlands.

Setiawan's compositions have been recorded and played in both classical concerts and jazz festivals and have been widely performed in Asia, Australia, New Zealand, The United States, Germany, and The United Kingdom. Some of his recordings were released and sponsored by Bamacher Musikverlag Austria, John Robert Powers International and Surabaya Arts Council.