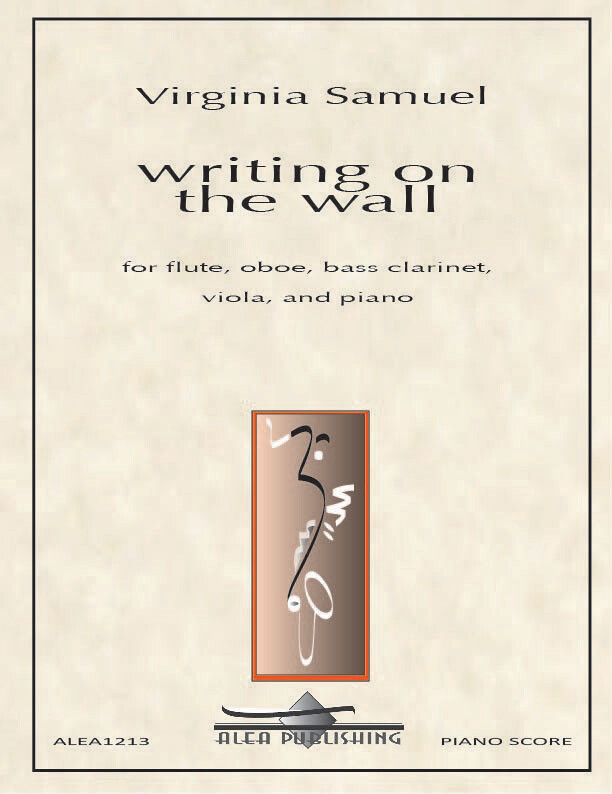 Samuel: writing on the wall

writing on the wall is an extremely well-crafted three-movement work for the beautiful ensemble of flute, oboe, bass clarinet, viola and piano. There are no extreme demands of technique or range for any of the performers, making for an accessible performance piece for a college-level ensemble, or a strong addition to a program for professional players.

Virginia Samuel started her career as a violist, studying with Dorothy DeLay and Scott Nickrenz at the New England Conservatory. She has performed solo and chamber music throughout the United States and was principal violist of the Boston Philharmonic. She earned her Ph.D. in Music Composition from Harvard University, studied with Donald Martino, Leon Kirchner and Malcolm Peyton, and has had her music performed in the United States, Canada, Europe and Israel.

Her composition awards include the 2019 VIOLA Competition for women composers, the Walter Hinrichsen Award and the Lakond Prize from the American Academy of Arts and Letters, 1st prize in the Boston Chamber Ensemble Competition, 1st prize in the Friends and Enemies of New Music Competition, a Music North Performance Award (Canada), a North/South Consonance (NYC) Performance Award, a Soundclock Performance Award at Merkin Hall, (NYC), Vox Feminae Festival (Israel) Performance Award, Kearney New Music Festival - University of Nebraska, two Harvard University Bohemian Prizes, an Atherton Fund Grant, a Heywood Memorial Fund Grant, a Weyman Fund Travelling Fellowship, a Fromm Foundation Award, and a Fellowship from the New Jersey Council on the Arts. Her commissions include ones from EARPLAY, the Michael Foundation, and the Peabody Trio, and her music is published by Henmar Press (C.F. Peters Edition). Her music is available on the Ravello label.