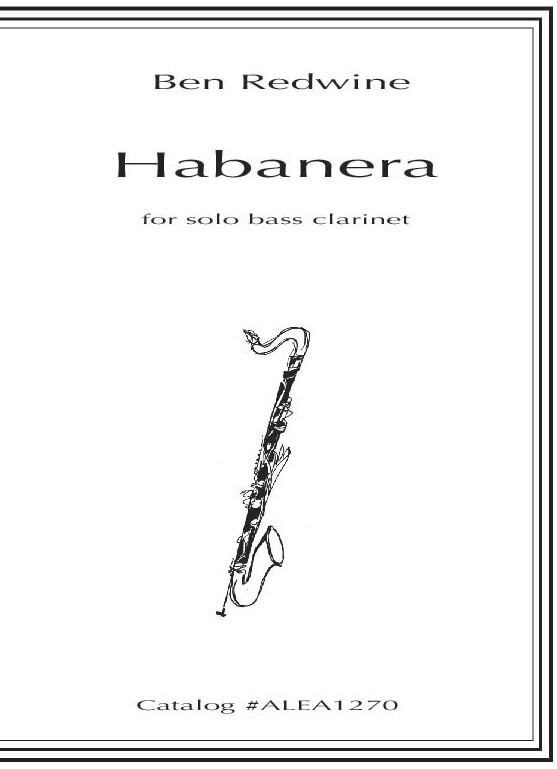 Alea is delighted to add the Habanera for solo bass clarinet to our catalog. This short and accessible work provides the bass clarinetist with an excellent idiomatic piece for study or inclusion on a recital program. Listen to the composer's own performance below for a sense of the style and difficulty of the work. An extended-range bass clarinet is NOT required.

"I am delighted you are interested in performing my work! Please feel free to contact me with any questions while learning my Habanera. I would be most appreciative if you would let me know if you plan to perform the work publicly." -- Ben Redwine

If you would like to avoid shipping charges and download the music in PDF format, this is the option for you! If you would prefer to receive a hard-copy, please purchase that item instead.

New Orleans based clarinetist Ben Redwine feels equally comfortable playing Brahms or Ellington. He is devoted to the performance of new classical music and old jazz, as well as to teaching the next generation of performers and teachers.

Ben served as an Assistant Professor at The Catholic University of America in Washington, DC from 2012-2016 and was woodwind professor at Southern University in Baton Rouge, Louisiana from 2017-2019. In 2014, he retired after 27 years in the US military band system, the majority of time serving as the e-flat clarinet soloist with the US Naval Academy Band in Annapolis, Maryland.He has been a featured soloist at seven International Clarinet Association ClarinetFests in the U.S. and Europe, and has performed extensively on four continents. In 2016, he moved to the New Orleans area to pursue performance opportunities in the birthplace of jazz. Since relocating to Louisiana, he has been a regular performer with the Louisiana Philharmonic and Baton Rouge Symphony Orchestras.

In addition to leading his popular traditional-style jazz band, the RedwineJazz Band, Ben is a Selmer Paris performing artist and a D'Addario performing artist, presenting concerts and master classes internationally. He has recorded for Mapleshade, Naxos, Vin Rouge, Big Kahuna, Antidote Sounds, and AmCam record labels, and composed and performed new music for 1920s era silent films featuring actors Charley Chase and Harry Langdon, released on DVD box sets by All Day Entertainment. All of Ben’s recordings can be found at his website, redwinejazz.com.

Ben earned a bachelor of music education degree from the University of Oklahoma, a master of music degree from Louisiana State University, and a doctorate degree at The Catholic University of America, studying clarinet performance with a minor in Latin American music history. He has studied with Loris Wiles, David Etheridge, Steve Girko, Steve Cohen, Ignatius Gennusa, Ben Armato and Paul Cigan.

Founder of the company RJ Music Group, Ben manufactures quality products for discriminating musicians, including Gennusa mouthpieces, the Reed Wizard, and other products and books by Ben Armato.

Ben lives on the north shore of Lake Ponchartrain with his wife, Leslie, and their flock of chickens.