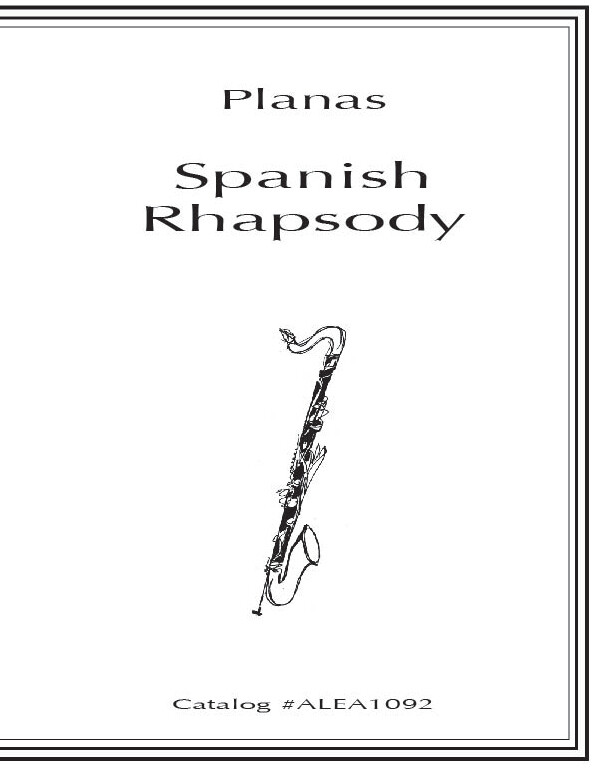 Composed for a solo concert bass clarinet, this 8 minute work contains 6 short sections. The work was composed for and premiered by Lucy Downer, and is included on her CD Conversations, which is available on iTunes.

The opening Cadenza introduces the work with a wistful theme, freely played mainly in the middle clarino register. The second, 16-bar section is simply called Slow, and introduces a habañera theme which begins in the altissimo register, but gradually falls back into the clarino again, with several quick interjections from the very bottom of the range. This section ends on the lowest note of the bass. The following Fandango in a lively 3/8 provides a complete contrast to the previous two sections. This dance demands complete dynamic mastery, as well as technical fluency in every register, and is a particular challenge as it draws to a close, with repeated leaps across all three registers.

The fourth section is another, shorter Cadenza, beginning with a rising 'harmonic series' which ends on the highest note of the work, Eb'''', and then falls to the lowest notes of the bass, linking straight into the fifth section Habañera, which repeats the theme first heard in section 2. The intention was to create what is, in effect, a duet for one player. The first two bars establish the underlying habañera rhythm, then the theme is played above this. Use of dynamic and timbral variation helps to reinforce the effect of a duet. As this section develops, triplets are used to bounce between rhythm and melody, rising to the upper reaches of the instrument as we reach the final Coda section, a reprise of the opening cadenza theme finishing with four multiphonic chords.

Purchasing this edition will allow you to download the score in PDF format. If you would prefer to receive a hard-copy, please purchase that edition instead.

Nick Planas is a composer of orchestral and chamber music in a number of styles and genres, including music for the stage, and educational music. He has composed several large orchestral works, two operas, several musicals and a number of chamber works and music for solo instruments.

In addition to composing, Planas is also an experienced conductor of shows and orchestras at every level, from beginner to professional orchestras. When not composing or performing, he teaches woodwinds, theory and composition. For more information about the composer, visit his website!