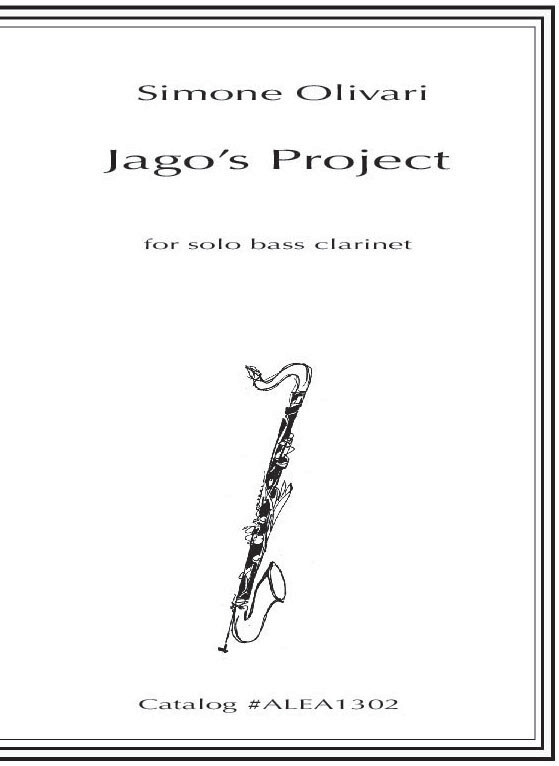 We thank the composer for sharing this program note about the his work:

The piece, written for bass clarinet and inspired by Shakespeare's Othello, is intended to investigate the plots warped by Jago and shows their devastating effects on Othello's mind. The generating principle of this composition comes from the sentence pronounced by Jago: "Work, work, my poison". (also contained in the second act of Verdi's opera).
From these assumptions, a piece with dark and sinister hues was created in which the clarinet is a reminder of Jago's metaphorical poison settling in the Moro's brain. This growing poisoning is expressed through rhythmic accelerations created by irregular and increasingly note groups that make their time fluctuate until every musical accent is lost.
The result is a continuum that no longer sees time scans but a long fluctuation that generates a constant sense of loss of balance. At the end of the Shakespearean tragedy, Othello - blinded by jealousy - will kill Desdemona. The piece ends by stopping the exact moment in which Othello, following Jago's advice, decides to strangle Desdemona. The poison has had the effect and in doing so, the rhythm of the piece begins to decelerate, leaving room for dark sounds that are prelude to death.

Listen to the premiere performance, which begins at 21:40 in the following video:

Simone Olivari, born on December 13th, 1982, graduated in Philosophy and completed his musical studies at the Conservatory "G. Verdi" of Turin, graduating in Composition and in Instrumentation for band. He obtained the National Certification in Music Videography and studied Orchestra Direction, attending at a course at the music school "Gianfranco Bottino" in Acqui Terme (Italy).

Since 2011, he has held the role of musical stage director in important national and international opera productions (Kazakhstan, Switzerland, France, Germany and Romania).