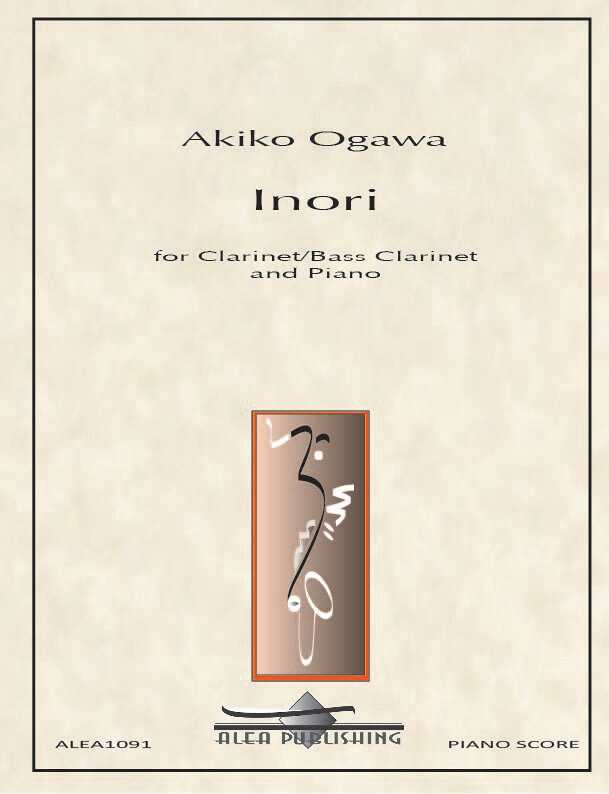 This piece is dedicated to the Japan Tsunami victims, who have lost lives, families and hope. The title, Inori, means 'prayer' in Japanese.

The work has a duration of approximately 8 minutes, and features primarily the bass clarinet, with the final section requiring a switch to B-flat clarinet. This artful piece is an outstanding addition to the performance repertoire for the advanced bass clarinetist. Inori received its world premiere on July 26, 2012, with clarinetist Lucy Downer and the composer at the piano, at St. Pancras Parish Church in London.

Akiko Ogawa was born in Nagoya, Japan. She started to play the piano at the age of four, and began composing three years later. In September 1994, she was awarded a bursary to study at the Purcell School, where she learnt composition with Alison Cox, Melanie Daiken, Brian Elias and Richard Dubugnon. In September 2000, Akiko went on to study composition at the Royal Academy of Music, studying under Paul Patterson, where she graduated with Honours. Akiko completed her MPhil in Musical Composition at St. Edmund's College, Cambridge under Robin Holloway, where she was chosen to be the president of the music society. In July 2011, Akiko was awarded her PhD in Composition at the University of York, where she studied under Roger Marsh.

Akiko has had a number of her ensemble works performed by the Okeanos ensemble across the UK, including a performance of Interweaving at the Vale of Glamorgan Festival in 2005, and a performance of Kōyō in Dartington in 2009. In 2008, her second clarinet concerto, The White Bird, premiered at the Royal Festival Hall, performed by Mark van de Wiel and members of the Philharmonia Orchestra. Akiko has taken part in the International Dartington Summer Course in 2009 and 2010, where she was instructed by Somei Satoh and Julian Anderson respectively.