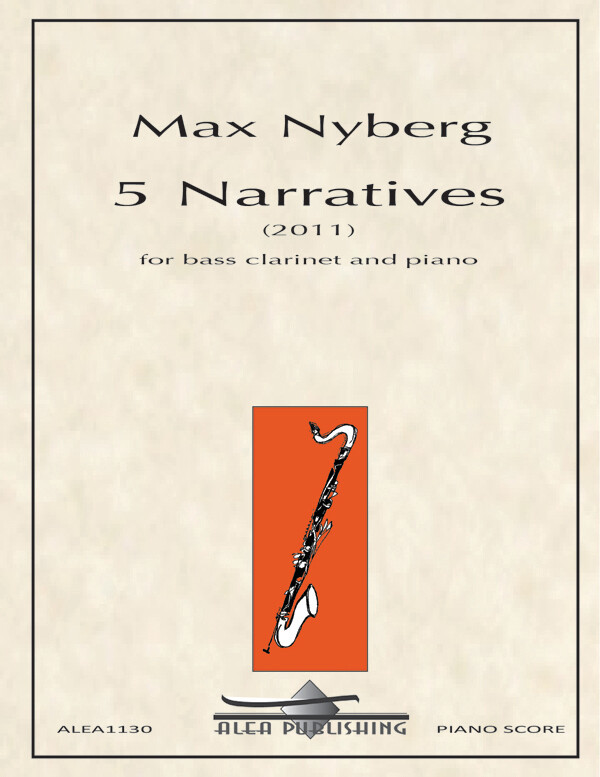 These 5 narratives were written for a concert in the summer of 2011, with the composer at the piano and his brother playing the bass clarinet. The piece is made up of 5 stories from 5 different places and is to be played as one would speak rather than sing, allowing for great freedom of expression but at the same time requiring a natural simplicity, exactly as when speaking (improvising in) your mother tongue.

A major inspiration for the form of the pieces is the Four Quartets by T. S. Eliot where time is not given the control over the development of themes and motives which exist in every direction. These poems have also inspired the use of varied styles of expression, such as the folk music and jazz influences, and of course the central idea of speaking music. Each of the 5 stories reflects some aspect or part of the Four Quartets, telling about an experience which in some way is connected to them.

Max Nyberg is a pianist and composer from Sweden. He studied both classical and jazz piano in his youth. While the classical genre was what he found most stimulating, he still considers improvisation an important part of his music making. He earned his Bachelors degree in Oslo and is now studying his Masters degree in Cologne, specializing in the music of Bach, Beethoven and music from the 20th century.

One of Nyberg's main focuses when composing has been on what Schoenberg calls the "Idea" of a composition. These ideas - functioning as the DNA of a composition - act as building blocks on all levels; the motives, themes as well as both the smaller and larger structures all finds their origin from the same DNA. The ideas in his compositions often stem from variety of "extramusical" areas such as art, science, poetry, cinema and philosophy, which, except for music, are his greatest interests and main inspirational sources. The goal and ambition for every composition is to create a metaphorical community where very different ideas are allowed to interact and communicate with one and another freely.

This performance from 2011 features the composer (on piano) and his brother (on bass clarinet). Note that due to subsequent revisions to the work, this recording does not exactly match the work as we now publish it.