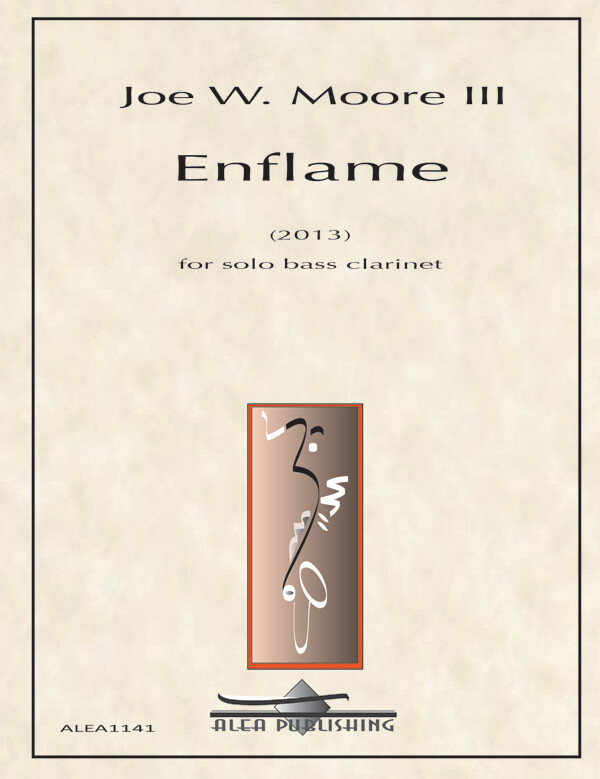 Enflame (2013) is a dramatic two-movement work for solo bass clarinet by American composer and percussionist Joe W. Moore III. The work, dedicated to clarinetist Rachel Selice, makes effective use of the wide range of the instrument, and yet does not require an extended-range instrument, nor does it make demands of the altissimo register. With its relatively short duration, the piece makes for a versatile addition to the repertoire of the college or professional player. Solo Score: 5 pages, spiral bound.

Active as a soloist and chamber musician, Moore performs as a member of the Omojo Percussion Duo and the Black Sheep Percussion Quartet. Most recently, the Omojo Percussion Duo performed as featured artists at the 2nd Annual Brownsville Marimba Festival. In 2015, Moore was featured as a soloist with the Rio Bravo Percussion Ensemble during their showcase performance at the 2015 Texas Music Educators Association Convention. In 2008, he performed in Ukemerge and Kaunas Lithuania as a soloist with the UCF Percussion Ensemble during the Ukemerge Annual Percussion Festival. Dr. Moore has also held performing positions at Walt Disney World, as a sub-list member of the Baton Rouge Symphony Orchestra, and as a member of the Rhythm -N- Blue Drum Line for the Orlando Magic NBA team.