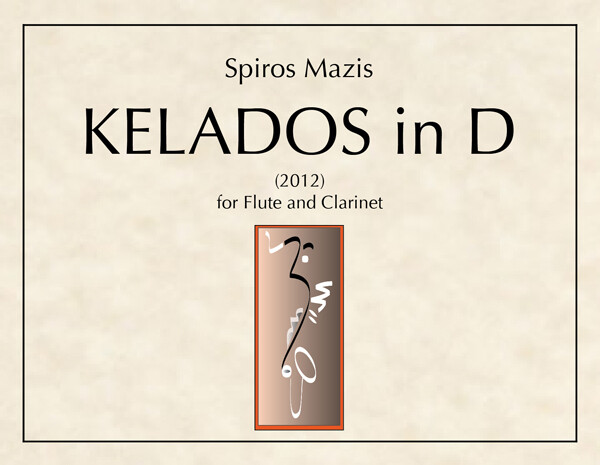 The piece is written in one of the 55 multiharmonic, multispectral modes which the composer has devised. The specific modes are based upon new formations of sounds beyond the octave and consist of much smaller intervals of semitones. Simultaneously with the multiharmonic, multispectral mode, there is an ancient greek enharmonic tetrachord which is function as a key figure throughout the whole piece. Ancient Greek music theory distinguished between three genera of tetrachords: diatonic, chromatic and enharmonic. An enharmonic tetrachord is divided (descending) as a ditone (major third) plus two micro-intervals.

The work begins with an isocratic on D which is constantly changing and new rhythmic values and timbral techniques are being added. There is a richness of tone colours with contrasting parts which sometimes interchange with thick or dense texture, and other times with transparent or thin textures which give the feeling of relaxation and meditation. Musical sounds, noises, strokes, multiphonics, and the voices of the performers are alternated, as a feast of tones, giving an ancient primitive color. The work is dedicated to the excellent musicians, George Skrivanos and Alexander Michaelides.

Spiros Mazis was born in Greece. He holds a Degree in Composition with Distinction and First Prize from Athens, and PhD in Music Composition with Thomas Simaku at York University, England. He attended composition seminars with Theodore Antoniou and Iannis Xenakis in Greece and Tristan Murail and Marco Stroppa in Hungary. He also attended Computer and Electronic Music seminars, with David Waxman and Andrea Szigetvari.

Eight of his works have been distinguished in composition contests: "Barrier" for 15 musicians, in the competition of the "House of Fine Arts and Letters" in Athens, 1987, "With the stream of the Nile" for solo piano, at the International Composition Competition of Paris Concours de Composition Prix Voya Toncitch, 1987, "Pindar's Hymns" for lyric soprano, mixed choir and orchestra in the "Musical Olympics" competition 2004. Also, "Phlyax" for solo cello was selected and performed by Rohan de Saram (cellist, Arditti Quartet), "Ouk Estin Piston Ouden" for seven performers and "Ialemos" for solo Horn were selected and performed by Chimera ensemble, and "Gazing into Infinity" for string quartet was selected by the Kreutzer Quartet at the University of York. "Ten Dimensions AEB160" was selected and recorded for the "Orchestral Masters vol.1" CD, from the Ablaze Records Company in USA, and "Kelados" for flute and clarinet was recorded for the Orchestral Masters Vol. 5 CD. "Seven Pictures" for piano and "A leaf" for soprano and piano were recorded for the Corfiot Composers' CD. Works for orchestra have been performed by: Athens State Orchestra, Greek Orchestra of Colours, Bulgarian String Orchestra Beograska, Italian Symphony Orchestra of Meran, American String Orchestra of Charleston, Louisiana Symphonietta, German Symphony Orchestra of Marburg, Helvetian Orchestra Santa Maria, German woodwinds orchestra from Langenargen, German Symphony Orchestra of Neckarsulm, and Bavarian Classic orchestra, Brno Philharmonic Orchestra.

His research is based on exploring the harmonic series and the relations among their partials with a way that he names Multiharmonic Mode or Multispectral Mode. He has invented a system of new fingerings for microtonal intervals for brass. He is the Director of the "Classical and Contemporary Music" Conservatory in Athens and member of the Greek Composers Union.

Listen to a performance by the musicians to whom the work was dedicated: