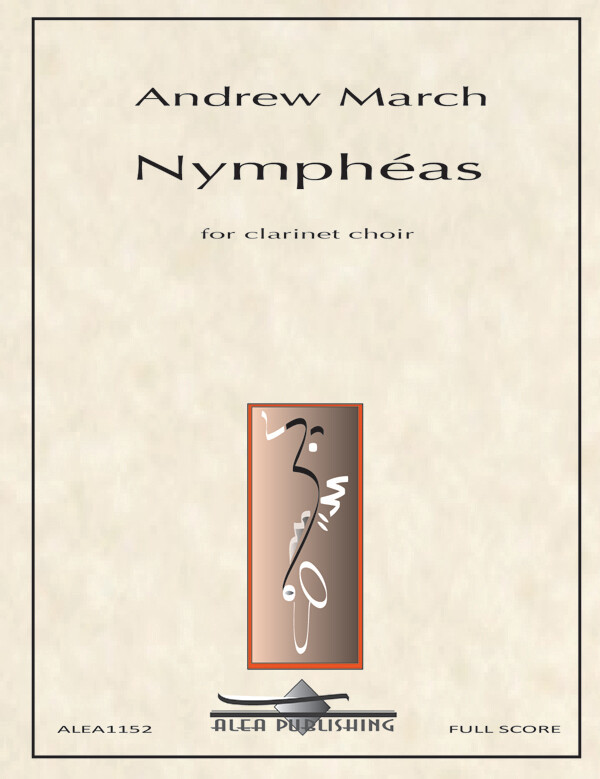 Nymphéas was originally written in 1995 for a mixed ensemble of 8 players: clarinet, alto saxophone, trumpet, French horn, vibraphone, piano, viola and double bass. This reworking of the piece for clarinet choir was completed in 2016. The work was inspired by Monet's series paintings of water lilies. The movement in the sixteenth-note septuplets creates harmonic saturation and is intended to suggest an aquatic environment. The structure, punctuated by periodic changes in the bass, takes on an arch-shape, where a melodic element is presented. The single-movement work has a duration of ca. 4 minutes.

The first performance of the original version took place whilst Andrew was studying at the Royal College of Music in July 1995. Later that year, Andrew was awarded the Cobbett & Hurlstone Prize for the piece. In 2006, Nymphéas was recorded for Volume 11 of ERM Media's "Masterworks of the New Era" with players from the Kiev Philharmonic. In 2001, Andrew reworked Nymphéas for two pianos, for pianist brothers, Peter and Patrik Jablonski. The duo premiered the piece at Royal Palace Stockholm in the Autumn of 2002.

Listen to the work in its original instrumentation: