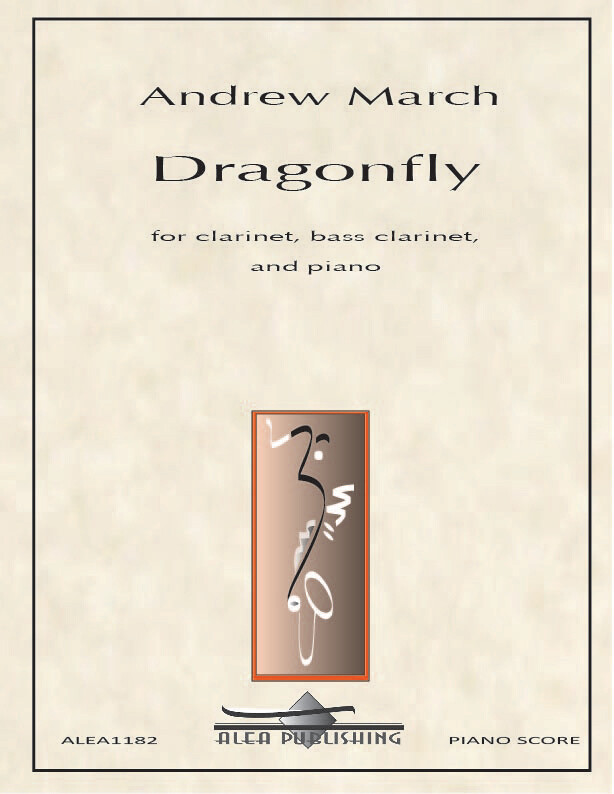 This piece was originally written for piano and flute, circa 1990. It has since been adapted a number of times for differing instrumentation. It was recast in 2001 for alto flute and harp, and in 2016, it was rewritten once more for trio of flute, viola and harp. Following the publication of the version for trio, it became clear that with some careful consideration, Dragonfly could be reworked for clarinet, bass clarinet and piano. By way of a fundamental precept, each instrument was to retain a vital and fully developed role, despite the change in instrumentation. Each part needed to be independent, substantial, and meaningful enough to engage the players fully.

The piece opens with a mysterious, ponderous passage intended to set the scene of the enigmatic world of Odonata. The piano introduces the frenetic movement characteristic of a restless dragonfly. The trio's material is not intended to onomatopoeically imitate the insect's private language but instead, figurative material is employed to suggest a certain behavioural pattern. Although the instruments tend to work together, the fluttery flight and erratic movement are idiomatic to the clarinet, as it rarely settles, and when it does; not for long.

Gliding on the updraft of a warm summer's evening, the use of same-note 'timbral trills' and flatterzungeenables the aerial acrobat to hover and sputter, then dart off in a random direction. Through a soft rippling action, the piano - marked una corda throughout - provides an image of the watery environment necessary for the flitting form of the dragonfly as it grazes the surface of the water. The harmonic direction, led by the piano, often turns a sudden corner. Textural support, provided by the bass clarinet, offers tension, grit and the buzz of vibration, and through carefully chosen tremolos, contrast and colouration is added.

An accented, subito cut-off marks a clear change of mood as the central section brings a turbulent, more predatory episode. The music exploits the unfamiliar truth that the creatures are, in fact, voracious eaters rather than just delicate, colourful aviators. The bass clarinet offers a greater degree of 'bite', befitting the toothed-jaw carnivores. The intense clarinet trills dismantle the prey in mid-air, whilst the discarded remains fall to the ground with the violent contrary-motion flourishes from both hands of the piano.

The clarinet and bass clarinet's use of delicate ornamentation is intentionally different each time, suggestive of the dragonfly's ability to control its two pairs of wings. This considerably varies their flying style as they seamlessly pass the melodic line from one to another. As the music calms, a brief high-soaring passage offers an opportunity for the clarinet to discharge the excess energy. The piece then returns to the more familiar, flowing material and after the pace slowly decreases, the spacious arpeggios in the piano herald the close of the piece as the clarinet and bass clarinet finally settle.

In 2001, Nymphéas for Two Pianos was written for pianist brothers duo Peter & Patrik Jablonski, who gave the World premiere in the Royal Palace, Stockholm, in the Autumn of 2002, and then followed with a tour that programmed the piece in and around Scandinavia. In July 2005, A Stirring in the Heavenlies(2000) was successfully recorded, in full, by the Kiev Philharmonic under composer/conductor Robert Ian Winstin for the landmark 12-CD series Masterworks of the New Era.