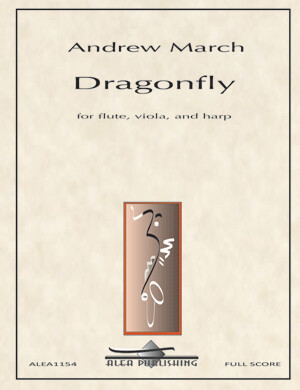 This piece was originally written in a simpler form, for piano and flute, circa 1990. It was recast in 2001 for alto flute and harp. In addition to the instrumentation described here, it is also available for clarinet, bass clarinet, and piano trio. The composition process has had a long gestation in order to arrive at a single-movement work for the renowned trio combination given to us so ably by Debussy. By way of a fundamental precept, each instrument was to have a vital and fully developed role. This meant not under-composing for either the viola or the harp. Each part needed to be independent, substantial, and meaningful enough to engage the players fully.

The piece opens with a mysterious, ponderous passage intended to set the scene of the enigmatic world of Odonata. The harp introduces the frenetic movement characteristic of a restless dragonfly. The trio's material is not intended to onomatopoeically imitate the insect's private language but instead, figurative material is employed to suggest a certain behavioural pattern and flying style. The fluttery flight and spasmodic movement are particularly idiomatic to the flute, as it rarely settles, and when it does; not for long.

Gliding on the updraft of a warm summer's evening, the aerial acrobat appears to hover and sputter, then dart off in what appears to be a random direction. The harp provides an image of the watery environment necessary for the flitting form of the dragonfly as it grazes the surface of the water. The harmonic direction, led by the harp, often turns a sudden corner. Textural support, provided by the viola, offers tension, grit and the buzz of vibration.

An accented, 'subito' cut-off marks a clear change of mood as the central section brings a turbulent, more predatory episode. The music exploits the unfamiliar truth that the creatures are, in fact, voracious eaters rather than just delicate, colourful aviators. The viola offers a greater degree of 'bite', befitting the toothed-jaw carnivores. The intense flute trills dismantle the prey in mid-air, whilst the discarded remains fall to the ground with the violent contrary-motion flourishes in the harp and viola.

The music calms, and a brief high-soaring passage offers an opportunity for excess energy to dissipate as the piece returns to more familiar material. The flute's ornamentation is intentionally different each time, suggestive of the dragonfly's ability to control its four wings, almost individually, considerably varying their flight style.

British composer Andrew March was born in 1973. In 1992, he attended the Royal College of Music, London, to study composition. Shortly after graduating, Andrew won the Royal Philarmonic Society Composition Prize 1996 for his symphonic poem, Easdale. His orchestral piece Marine - à travers les arbres (1997) won first place in the inaugural Masterprize International Composing Competition, and was recorded by the BBC for the European Broadcasting Union and by the London Symphony Orchestra in Abbey Road Studios for EMI Classics Debut Series. A cover-mount CD was included on the BBC Music Magazine in 1998. Marine - à travers les arbreshas been played by orchestras such as the BBC Philharmonic and has received a total of 13 international live performances including the Moscow Radio Symphony Orchestra and the European Union Youth Orchestra under Vladimir Ashkenazy which was televised for the BBC Proms in 1998.

This work has not yet been recorded, but the composer has prepared a computer rendering which we are happy to share: