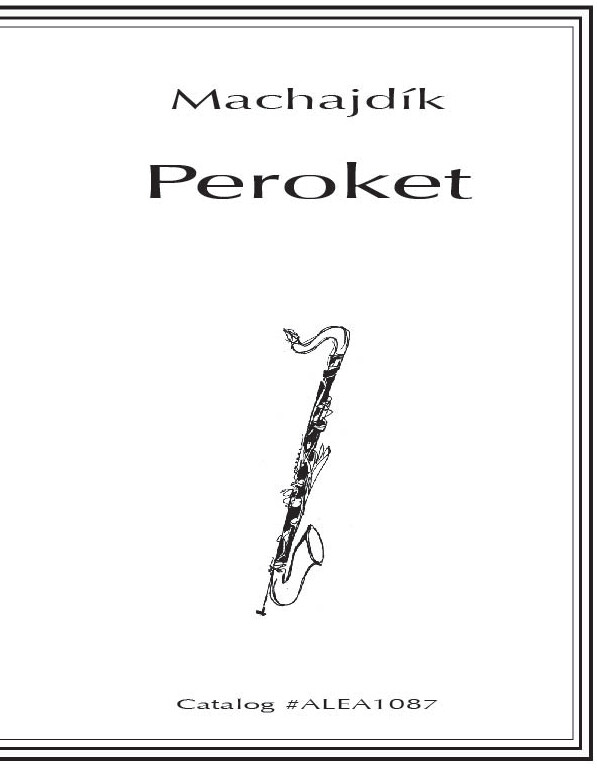 Peroket for solo bass clarinet was composed in 1999. Clarinetist Guido Arbonelli premiered the piece at the Mozart e il 2000 festival in Assisi, Italy in February, 1999. Peroket comes from the French word perroquet, meaning parrot. The composition includes a bit of imitation of birdsong as well as repetitive motives, both sonic and theatrical.

This is a highly effective performance piece. The work provides technical challenges, but as it does not utilize extremes of range or modern techniques, it is quite manageable for the advanced student or professional player. It has a duration of approximately 6'40".

Composer, performer and sound artist Peter Machajdík grew up in Bratislava, Slovakia but he has been living in Berlin, Germany for the past 17 years. At six, he began music lessons and at seven, took up the piano. In the 1980's he was not accepted into the Music Academy of Bratislava because his concept of music, at that time, was heavily influenced by the Western avant-garde. At 27, Machajdík graduated from the University of Economics in Bratislava, Slovakia.

Machajdík first became internationally recognised after the success of his multi media work Intimate Music featuring one of the most innovative singers and percussionists David Moss at Inventionen 1994 in Berlin. His prolific output has since been performed and broadcast around the world, placing him in the front rank of today's composers.

Complete biographical details about the composer as well as a works list may be found on his website: www.machajdik.com.

"Machajdík's meditative works in the style of the 'New Simplicity' are becoming increasingly well-known throughout Europe. Peroket (Parrot) was composed for Guido Arbonelli's 1999 performance in Assisi, Italy and is a work of medium difficulty that takes on alternately somber and ecstatic characteristics. Strangely, the extended range of the clarinet is not used - low A is the limit. Likewise the top range stops at the C two ledger lines above the treble clef, except for one E, a third higher. In a few short sections Machajdík directs: 'The performer slowly rotates around his/her own axis.' This theatricality, in addition to the use of one's imagination to be a bit of a parrot within the imitative sections, will connect with many performers and audiences.

Alea Publishing has grown a large catalog of bass clarinet transcriptions - including many chamber works, as well as several original works such as Peroket. With useful links, their website is an excellent resource for clarinet teachers."