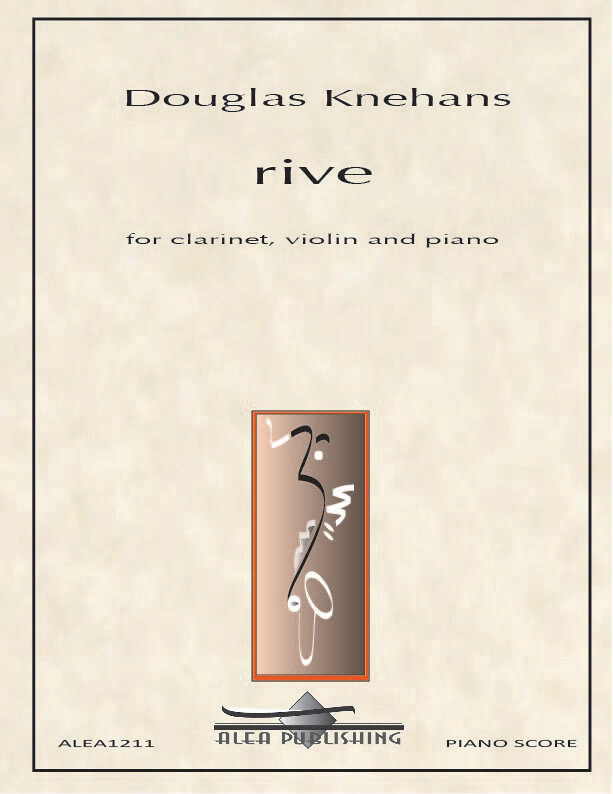 rive for clarinet, violin, and piano:

rive literally means a ripping or tearing apart. When the Verdehr Trio visited Tasmania in 2001 they were taken with the severity of such primal ripping and tearing as expressed in the feeding habits of the Tasmanian Devil. We had toyed with the idea of a piece about this and what it distilled to in my mind was a structural approach to musical material which was based on such muscular dismemberment of materials. In my approach to this work the whole of it is formed from a dramatic disaggregation of the materials unfolded in the opening 10 or so measures. All of this material is recycled, recombined, reharmonised, and variously reconfigured such that it morphs from one idea to the next while always relating back to the central initial ideas. This holds true also of the broader formal harmonic structure, which reflects the same harmonic underpinnings of the initial closural arc of the first large phrase group. This work represents somewhat of a departure from previous works of mine in its immediacy of expression and clarity, even its traditionalism in many ways. rive was written over a period of nine days at the Arthur Boyd property Bundanon, now the Bundanon Artists Centre on the Shoalhaven river in New South Wales. It is dedicated with affection to the Verdehr Trio.

Knehans' music is about immediacy, drama, power, playfulness, architecture, harmonic structure, melodic expressiveness and more importantly depth and dimension. His music is about both love and life and a number of important critics see it that way too when they say his music "...tells an exciting story, ever- intensifying in color, thematic ideas, texture and tempo." (The Washington Post); and whose orchestral music "...is radiant and multicolored. This is music of tremendous imagination. Knehans scores with a masterly hand, his sound paintbrush unerringly hitting the mark." (Fanfare Magazine)

For him music is nature and natural forms - endlessly varied but centrally unified. It is relationships with people and memory - the way memory burnishes experiences and encrusts it with a sometimes deeper meaning than the original. People, nature, relationships, visceral tactility, nuance, yearning, heartbreak, tenuousness, drama, power, weakness, enervation, completion, memory and more. These are the elements that now play into his music - the elements of life. These elements also take on technical and expressive meaning in his music through metaphoric pairings with nature and natural forms.

He currently lives and work in Cincinnati Ohio with my wife Josephine and two children Katarina and Joshua as well as the director of their household, their small dog Honey. He is a political junky interested in cooking, wine, natural and organic food; and a vegan and committed animal rights advocate who enjoys travel, art, architecture and music.