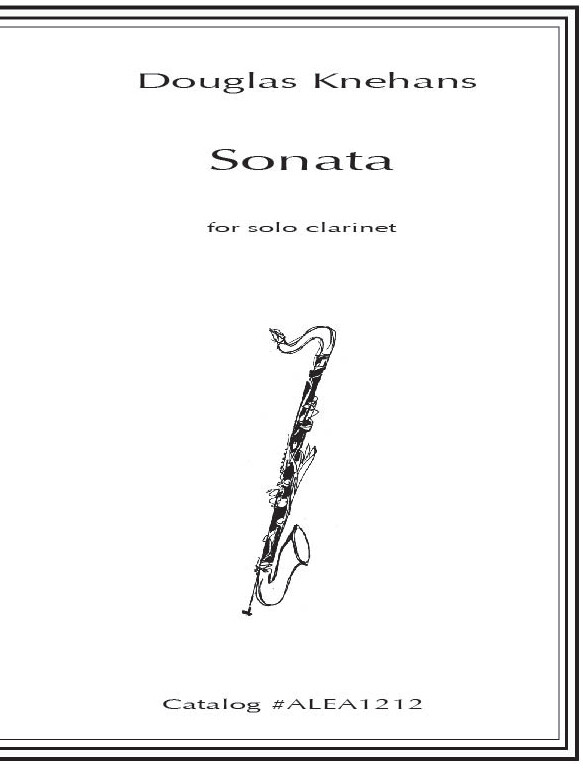 My Sonata for Solo Clarinet was the last work I wrote as an undergraduate student in 1980. The piece owes something to the influence of my then teacher. This quality is expressed in the virtuosic character of the piece and the somewhat dark, reflective quality of it. I was to come to know that both of these qualities actually are hallmarks of my mature work.

The piece is a cast as a Sonata movement framed by two preludes. The first being of tentative, yet insistent character. The final movement is something of a moto perpetuo with declamatory, trumpetlike interjections. The central Sonata movement is cast as an elaborate type of Sonata/Variation form all drawn from the initial material.

Knehans' music is about immediacy, drama, power, playfulness, architecture, harmonic structure, melodic expressiveness and more importantly depth and dimension. His music is about both love and life and a number of important critics see it that way too when they say his music "...tells an exciting story, ever- intensifying in color, thematic ideas, texture and tempo." (The Washington Post); and whose orchestral music "...is radiant and multicolored. This is music of tremendous imagination. Knehans scores with a masterly hand, his sound paintbrush unerringly hitting the mark." (Fanfare Magazine)

For him music is nature and natural forms - endlessly varied but centrally unified. It is relationships with people and memory - the way memory burnishes experiences and encrusts it with a sometimes deeper meaning than the original. People, nature, relationships, visceral tactility, nuance, yearning, heartbreak, tenuousness, drama, power, weakness, enervation, completion, memory and more. These are the elements that now play into his music - the elements of life. These elements also take on technical and expressive meaning in his music through metaphoric pairings with nature and natural forms.

He currently lives and work in Cincinnati Ohio with my wife Josephine and two children Katarina and Joshua as well as the director of their household, their small dog Honey. He is a political junky interested in cooking, wine, natural and organic food; and a vegan and committed animal rights advocate who enjoys travel, art, architecture and music.