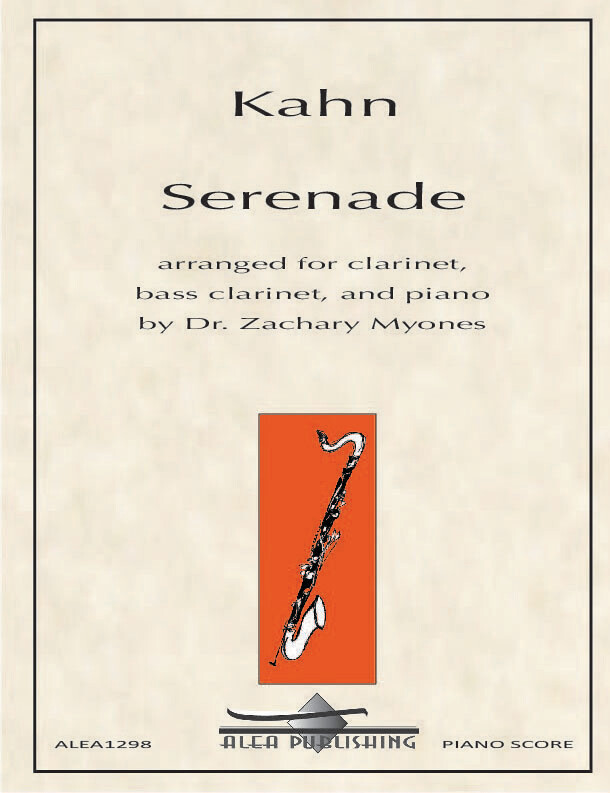 Robert Kahn’s Serenade in F minor Op. 73 is perhaps his most well-known composition today. Originally conceived as a trio for oboe, French horn, and piano, Kahn’s publisher suggested that he make it available for more instruments. Although the publisher requested making it available for a typical piano trio consisting of violin, viola, and cello, Kahn reworked the piece for multiple instruments. Published in 1923 through Simrock in Berlin, Kahn’s edition of this piece includes versions of the upper part and lower part for several different instruments while the piano part remains consistent through all versions. In the publication, Kahn lists all of the possible combinations of instruments. The upper part may be played by violin, viola, clarinet, or oboe, while the lower part is written for French horn, viola, and cello. This results in a total of twelve possible ensemble configurations.

Because of the unique publication history of the piece, it lends itself well to being further transcribed for additional instrumentations. This transcription of the lower part for the bass clarinet transposes the written part to g minor in order to maintain the original sounding key and range of Kahn’s composition. This enables the bass clarinet to play as the lower voice with any of the existing upper parts. This score is written for the instrumentation of clarinet with bass clarinet with additional parts available to create any of the possible combinations. This transcription does not require an extended-range instrument.

Add this item to your cart if you wish to have the hard-copy music shipped to you. We also offer this piece via PDF download: click here to choose that option.

Robert Kahn, a German composer, was born in Mannheim, Germany, on July 21, 1865, and died in Kent, England, on May 29, 1951. He studied at the Berlin Musikhochschule (Berlin Conservatory) and the Munich Akademie der Tonkunst (University of Music and Performing Arts Munich) and later ended up teaching piano and music theory at the Berlin Conservatory from 1894 until 1930. Among his pupils was the pianist Arthur Rubenstein. Kahn was forced out of his position in 1934 by the Nazi party because he was Jewish and eventually moved to England in 1937 where he remained until his death in the Village of Biddenden.

A composer of the Romantic period, Kahn’s primary musical influences were Johannes Brahms, Felix Mendelssohn, and Robert Schumann. Kahn was introduced to Brahms by the director of the Berlin Conservatory, Joseph Joachim, and informally learned aspects of composition from him. Kahn frequently utilized counterpoint in his compositions and focused much of his output on chamber music and choral works. Due to suppression of his music by the Nazi Party, few of his works are well-known today.

Zachary Myones has recently completed his Doctor of Musical Arts Degree in Clarinet Performance at Arizona State University, studying under Bob Spring and Joshua Gardner. He previously completed his Bachelor of Arts Degree in Clarinet Performance and Master’s Degree in Music Education with Teacher Licensure from Case Western Reserve University in 2014, studying clarinet with Daniel Gilbert, voice with Mark Wanich, orchestral saxophone with Greg Banaszak and harpsichord/organ with Peter Bennett. He has also studied under Chester Rowell and Eric Jacobs on bass clarinet and clarinet.