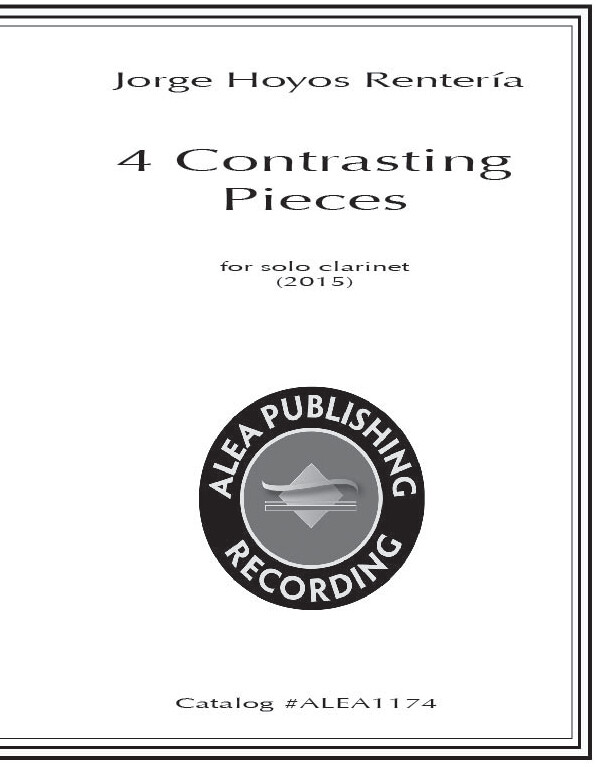 Notes courtesy of the composer:

Composed in 2015, the 4 Contrasting Pieces for solo clarinet were conceived as an exercise of style, they work both ways, individually and as a group. The first piece "A duras penas" is a search for redemption and meaning, a sort of elegy. The second piece "Meditación" explores extended techniques, and its arc-shaped contour suggests a journey to a higher state and back. "Pieza geométrica" manages to balance harmony and melody in a Bach-like figuration. The last piece "Esto es una fiesta" portraits moments of a genuine Latin-American celebration.

Born in 1984 in Medellin, Jorge Hoyos studied at the Adventist University of Colombia were he earned his bachelor degree in music education in the year 2006. In 2010 he graduated from The Superior Institute of Arts in Cuba as a classical guitar performer and in 2015 he obtained a master degree in music composition from EAFIT University.

At present he works as composer, as classical guitar performer and as a professor of music theory at the Adventist University of Colombia and the Metropolitan Institute of Technology. His works vary from orchestral pieces to chamber and solo music. Several of his works have been commissioned and performed by artists and ensembles such as, Javier Asdrubal Vinasco (clarinetist), Carlos Areiza (percussionist), Andrés Gomez Bravo (pianist), Percanto ensemble (percussion), among others.

Listen to a live recording of the last of the four pieces!