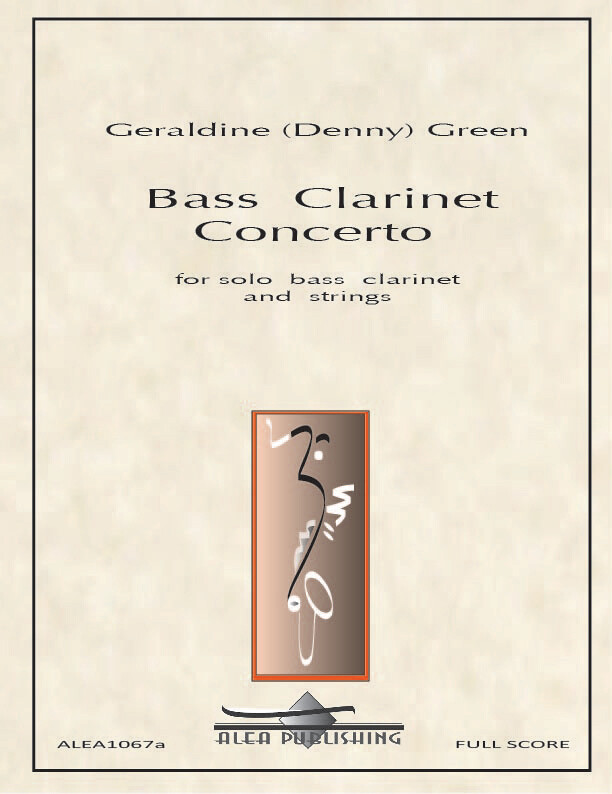 The 2nd Edition of the full score/parts version of this publication was released in April 2018, incorporating a few notes/corrections that have come to the composer's attention after several recent performances. Known affectionately as 'Basso' by Geraldine, her friends and family, the Bass Clarinet Concerto was inspired immediately after the composer purchased her first bass clarinet in 1992. The score was completed in the September of that year, only five weeks after it was begun, such was the affinity she had for the instrument.

The piece has three movements and its total duration is approximately 23 minutes. The first and third movements are generally jovial and mischievous in character, while the second is more austere, demonstrating the bass clarinet's darker side. The work is centered around the key of B flat major so that the use of the bass clarinet's bottom C could be indulged in to the fullest.

In January 1993 the concerto received its world premiere in St. Cyprian's Church, central London, with Anthony Davie conducting the London 20 strings and Geraldine as the soloist. It received an extremely warm and enthusiastic response from the audience and Geraldine still remembers the whole event very fondly.

Geraldine Green was born in 1967. Her interest in music was awakened when she was 7 years old, during a holiday when she stayed with a family of musicians including the composer John Dunn. At 11 she began the clarinet and piano at the Belfast School of Music, where she studied until the age of 18. It was during this time that Geraldine's passion for composition began, and she began writing her first piano pieces and studying orchestration with the help and encouragement of her teacher Gerry Deignan.

In 1986 Geraldine went to the London College of Music to study clarinet with David Campbell and piano with Renalda Mackie. Following a 3 year degree course, she then completed a post graduate diploma in Film Music under Francis Shaw. By then the urge to write music could no longer be contained and in the years that followed she wrote a number of works. These included a Recorder Concertino, the Bass Clarinet Concerto, a Septet for string quintet, flute and harpsichord, and a concerto for B-flat clarinet and orchestra. During these years, Geraldine also wrote four musicals for Herne Hill Primary School in London.

Throughout the 1990s Geraldine taught clarinet and piano at Ibstock Place School in Roehapton, London, and this soon led to her producing orchestrations and arrangements for the school's orchestra, band and choir. Through this work she met Peter Morris who commissioned her to write a piece for his Thameside Clarinet Choir. The 3 movement Divertissement was the result. A clarinet quintet, commissioned by Michael Bryant for his clarinet 'play days' was soon to follow.

After a break in music writing to start a family, March 2008 saw Geraldine return to writing with a seven movement piece for piano, 'Miscellany'. The year 2009 saw the world premiere of her flute concerto, performed by flautist Gary Woolf (who commissioned the work) and the Chiltern Camerata in High Wycombe, UK, and conducted by composer Simon Lambros.

Geraldine is now married and lives in the UK with her family. She regularly plays clarinet and cello with local symphony orchestras, and also enjoys playing and writing traditional Irish Folk music. For further details on Geraldine Green please visit her website at GeraldineGreen.co.uk or at OakMountMusic.co.uk.