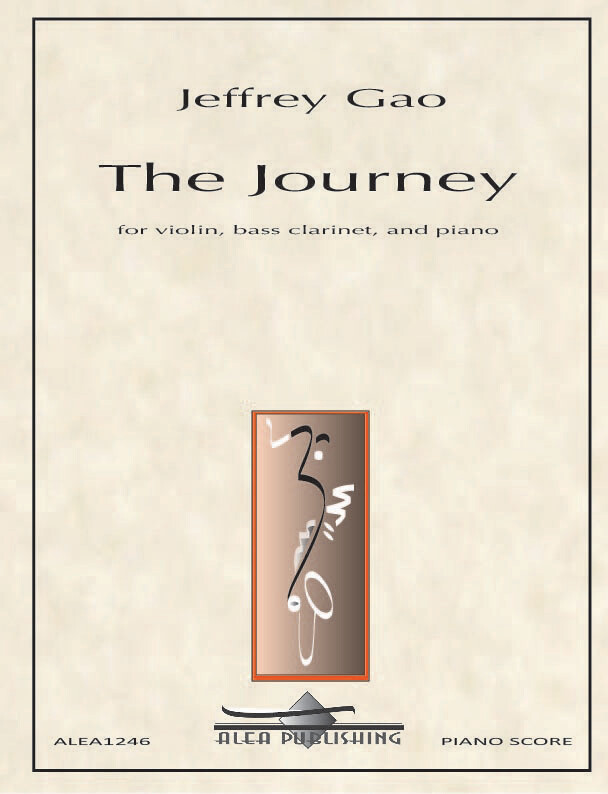 The trio for violin, bass clarinet and piano titled The Journey 游 was commissioned by Trio Clavino during their tour in China in 2013. The piece consists of 4 movements: I – Waking 醒; II – Chanting 吟; III – Walking 步; IV – Dancing 舞. The entire piece is derived from a 4-note motive: C#, D, F & G. ( The "Set"). This motive is first introduced at the beginning of section II by the solo bass clarinet. The mvmt I is really the "prequel" which deduces, or "dreams up" the central motive. The opening chord is essentially the same set in different position; the final sequence of the harmonic progression in mvmt I is the cadence leading up to the arrival of the Set in its original form.
In each of the mvmt II, III and IV, the Set assumes different tonal identity: Pentatonic in section II, thus providing a traditional Chinese folk song like atmosphere; Jazzy/Blues in section III, thus becoming decidedly American; and octatonic in section IV to give a jagged, modernistic feel. I also incorporated traditional Chinese folk tunes in mvmt II, III and IV. In mvmt II, the Mongolian tune Rendezvous in the Tent (敖包相会) which provided the base material for the opening duet btw the violin and the bass Cl isn’t introduced in its original form until it appeared as counter melody played by the bass clarinet, and it is promptly "deconstructed" upon arrival. In mvmt III, a famous YunNan (Southwestern China) folk song "The dripping water in the stream" (小河淌水) together with the Set formed the theme of the fugato. When the folk tune is played in its entirety by piano, it is under a "bluesy" cloak. In mvmt IV, the Muslim Chinese folk tune "The Flower and the Boy" (花儿与少年), very popular in North Western China, appears in a triumphant manner, but not before it is first superimposed on octatonic scale, which gives a humorous and almost a menacing feel.