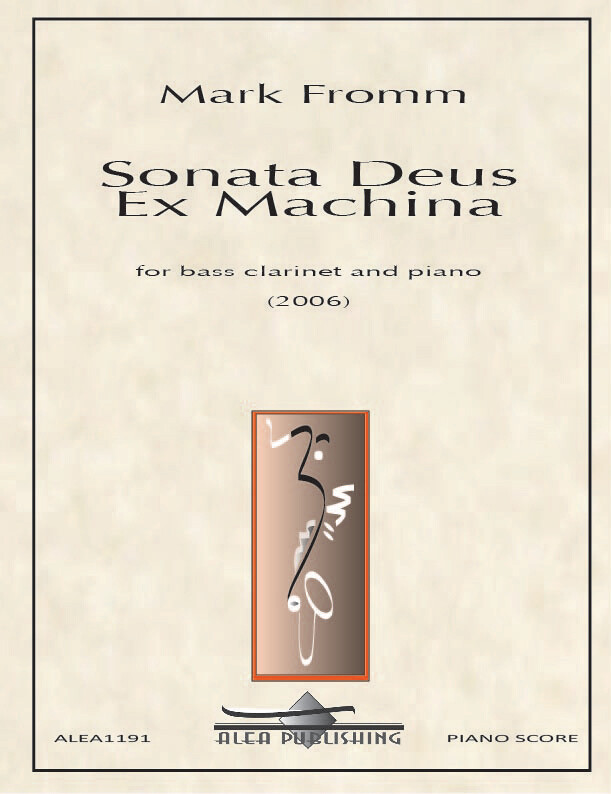 Deus Ex Machina is a Latin phrase meaning "God from the Machine". It was the name given to a device used in Greek and Roman theater, in which an actor playing a god or goddess would be lowered onto the stage by a machine and then resolve a hopeless situation. It has come to refer to any seemingly hopeless circumstance in a story which is resolved through unlikely or impossible means. This piece refers to both the literary and linguistic implications of the phrase. The two movements are quite different in character, though they share some thematic and harmonic ideas. The first movement, Deus Ex ("God from..."), is slow, lyrical, introspective, and questioning, with broad musical gestures. It is a meditation on the existence and implications of a higher power, with no real conclusion. As the movement fades away and dies out without resolution, a musical deus ex machina occurs: the second movement begins abruptly (the machine is lowered into place), allowing the music to continue on its course. This movement, Machina ("The Machine"), is fast, asymmetrical, jagged, and declaratory, with short, minute musical gestures. It flows steadily and mechanically with constant motion throughout. The bass clarinet cadenza towards the end of this movement is a mechanical wind-up of the themes and ideas presented earlier in the movement, which accelerate and culminate in a statement of the Deus Ex theme, signaling the lowering of the God into place.

Mark Fromm (b. 1982) is a composer and woodwind player from Pittsburgh, PA, whose music is inspired by science, nature, astronomy, and the unknown. He holds degrees in music composition from Carnegie Mellon (BFA), McGill (MMus), and University of Pittsburgh (PhD). Primarily writing orchestral and chamber music, major works include Symphony No. 1, written for Baltimore-based ensemble Symphony No. 1; Lingua Cosmica: Concerto for Contrabassoon and 15 Players, written for the Carnegie Mellon University Contemporary Music Ensemble; and Silent Spring (for flute, clarinet, and singing pianist), for Pittsburgh trio Trillium Ensemble. He currently teaches composition and music theory at the Pittsburgh Creative and Performing Arts High School.

Sonata Deus Ex Machina is featured on the recording Silent Spring by the Trillium Ensemble, which can be previewed and purchased at CDBaby, Amazon, or iTunes.