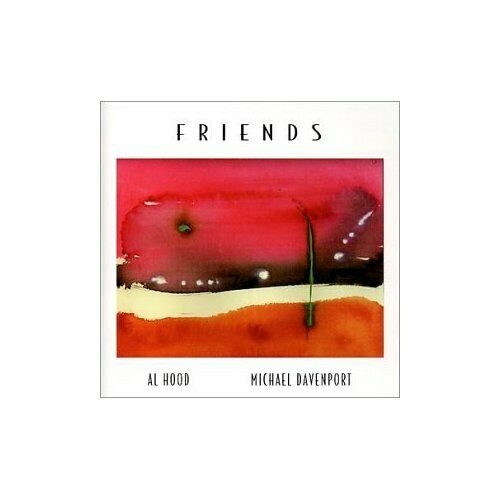 To purchase a digital download of this album (or individual tracks), visit the album page on CD Baby. For a physical CD, add to your cart here!

"The new CD Friends includes three by Monk, and nine originals by Michael Davenport and/or Al Hood. Some of the music seems freely improvised, other pieces are more considered. With Davenport playing mostly clarinet or bass clarinet, and Hood on piano, this is music that frequently sits on a fuzzy line between jazz and contemporary chamber music, if there is a line... this kind of playing indicates it's more of a continuum (are Bartok and Monk really that far apart?) Both musicians have backgrounds in concert music and jazz as well as being composers and highly regarded teachers. This is absorbing music and very rewarding listening..."

"During the late 1970s and early 1980s, pianist Al Hood was one of the few irreverent voices on Seattle's avant-garde scene. His 'outside' approach, which took in Cecil Taylor's fury, Thelonious Monk's quirkiness and Paul Bley's pastel impressionism, attracted an important circle of young musicians to his jazz workshop at Seattle Central Community College and to his legendary evening classes at home, which continue to this day. 'Not Quiet Rite,' by the Al Hood Quartet, is still one of the finest albums ever recorded in Seattle.

...Hood has maintained a musical relationship with Mike Davenport, a reed player and much-revered teacher of dazzling technical ability and bristling imagination. A tape of their smash January 'comeback' concert at the Nordic Heritage has been released as 'Friends,' an excellent disc on which Hood is very much his plucky, pointillistic, witty self; Davenport crystalline, speedy and thoughtful; and the interaction between the two playful, surprising and instantaneous..."

"The collaboration of Hood-piano and Davenport-clarinet is a superb trip in modern jazz improvisation, bending edges and extending envelopes. Monk's "Think of One" is laughing stride, almost conversation while walking using space and accent. Davenport's "Obluxious" is darting like a kid or your dog dashing about. Hood plays with authority without bashing allowing the lyrical clarinet to challenge push the envelope while Hood maneuvers underneath the high fire. "Tree Fune" is a ballad extending, laconic and edgy. Hood is one of the great players of space and time taking some of the stride greats and Paul Bley into his particular envelope. "3 For One" is a lyrical walk as Davenport floats in this accessible space. The voicing on "Trinkle, Tinkle" sounds like a bop treatment of a jazz standard as the bass clarinet presents such a full sound and Hood chords in a wide texture. "Some of The Things I Was" is Hood's mischievous humor, small vignette jazz lines that Davenport responds to moving from a bop lick, to a ballad reprise, to an avant jumble. This somewhat outside music is accessible and a good place to learn more about experimental jazz. These are two pros."

You could call it spontaneous re-composition of scored material. It's jazz improvisation that draws from the American jazz tradition and equally from the Euro-American classical tradition. With tunes rather than spontaneous composition. Walk in on a Hood performance at any moment, and you'll hear the tune he began with; it's just that you will be hard-pressed to imagine how he got there.

The tune may well be, significantly, one by Thelonius Monk, a pianist of similar oblique architectonics. Like Monk, Hood may, within a short musical while, swirl, swing, or meander through numerous harmonic regions, but never risk running off his imagination's own rails.

With chamber music, he shares the conviction that no instrument should merely fill a role. There's no walking bass or chink-a-chinging cymbal. If an instrument is in the mix, its player had best do - add - something.

In clarinetist Michael Davenport, he has had, for many years, an ideal counterpart and foil. From the classical realm, Davenport comes to meet the more jazz-origined Hood in consistently dazzling, harmonious collaboration.

Friends includes location recordings of several compositions by both players, as well as three by Monk. Several pieces date from 1984, others from the last 12 months. The two players exhibit unerring attention to each other's playing.

For years, Hood, one of the first Seattle Jazz Hall of Fame inductees has been an enormously influential but low-key titan of this region's musical life. He grew up on the south side of Portland, Oregon, and spent his early career as a member of Gene Ammon's road quartet and as a working pianist in New York. He was a lifelong friend, and something of a mentor, to the late Jim Pepper, and founded the Community Creative Music Ensemble at Seattle Central Community College after relocation here in the mid 1970's. In the early and middle 1980's, Hood recorded two classic albums, Not Quiet Rite (Au Roar) and Spheres (on Gary Bannister's old label Audio Daddio). After an extended tour of Europe with his trio in 1981, he returned to form the new incarnation of CCME, Frog University Players. It has been a haven hollow for fellow players."