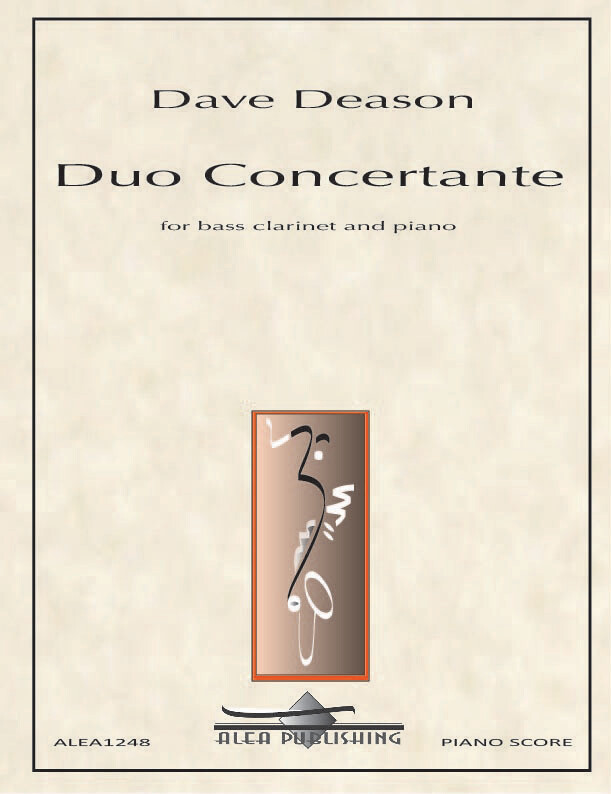 This two-movement piece is a programmatic work consisting of two movements entitled "Ghost Town" and "Speed Bumps". "Ghost Town" is inspired by my visits to various ghost towns in Oregon. Some of the ghost towns are quite spooky and enigmatic. The piece captures the haunting sensation one feels when visiting the towns. The performance should give the impression of being almost motionless in time.

"Ghost Town" features a three-part construction, beginning with a drone-like ostinato in the piano under which the bass clarinet emerges with a haunting theme. The middle section begins with very low piano sonorities stated in a very slow dirge-like tempo, reaching a climactic point featuring a low C in the bass part. The tempo should gradually accelerate until the original tempo is reached to begin the third section. The drone-like ostinatos return until the final measures, where the piano concludes the movement with a single repeated note in the haunting manner of the first section.

"Ghost Town" should be played with an initial slow tempo as indicated in the score. The bass clarinet part does not venture into the highest notes of its range, but generally stays in the lower to middle part of the instrument’s range, as befits the mood of the piece. Technical demands are moderate, enabling it to be played by advanced high school students up to college students and professional performers.

"Speed Bumps" is a fast, almost frantic movement featuring a true conversation between the two instrumentalists, who are on equal footing, as opposed to the traditional theme with accompaniment. Formally, the piece features a continual unfolding of the ideas stated at the beginning in the manner in what Germans call durchfuhrung. The entire movement continues to build intensity until the coda is reached, where the bass clarinet announces the final thematic statement over a frantic ostinato in the piano until the rousing ending.

The performers may select whatever fast tempo with which he or she feels comfortable, but should stay as close to the indicated tempo as possible.

Dave Deason was born in South Dakota, but lived primarily in South Carolina and Florida. He grew up playing both clarinet and piano, eventually becoming a professional Jazz pianist and teacher. He received both the BM and MM degrees from Florida State University. After graduation, he held several Professorship positions at universities in South Carolina and New Jersey. In 1992, He received his DMA from The Ohio State University, specializing in Medieval Theory and Composition, followed by an offer to chair the Music Department at Marylhurst University in Portland, Oregon. He remained in Oregon for 25 years, after which he, his wife Mary, and their 5 Scottish Terriers moved to Kentucky, where they presently reside.

A recipient of numerous composition and teaching awards, Dave has written works in all genres of music, including Classical chamber pieces, concert band scores, piano music, Jazz pieces, and film scores. In 2000, he was commissioned by the Oregon Music Teachers Association as Composer of the Year to write a 2 piano suite called Sugar Beet Suite. In addition to receiving 5 ASCAP awards and 3 Meet-the-Composer grants, he received several grants from individual performers for various pieces. Deason's music has received numerous performances around the US, Israel, and Europe. Ensembles recording his music include the Eastman Saxophone Project, the Verismo Trio, the Indiana University Percussion Ensemble, and the Breaking Winds Bassoon Quartet. His Wind Tunnels for Trombone Quartet was recorded in 2018 by the Szeged Trombone Ensemble. The piece is dedicated to them.

He has two piano recordings, including Oregon Impressions for Piano Solo (2003) recorded by Rhonda Rizzo. As pianist, he recorded From Another Time and Other Original Ballads for Piano and String Orchestra (2010). He is associated with Roads End Films in Newberg, Oregon. He recently scored the action-adventure film From Kilimanjaro with Love, which was nominated for Best Score at the Indie-fest 2008 film festival held in Los Angeles.