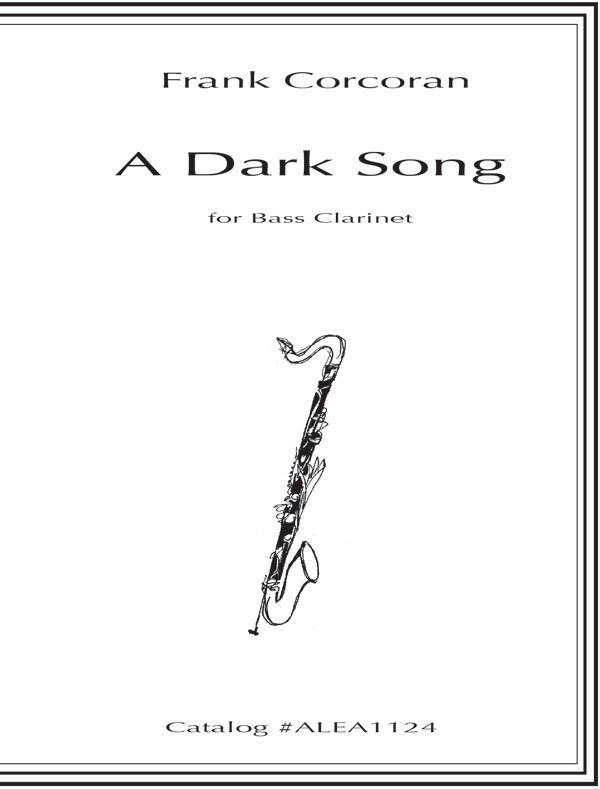 Alea is proud to include this solo bass clarinet work by established Irish composer Frank Corcoran in our catalog. A Dark Song was composed in 2011, and premiered the same year at the Royal Irish Academy of Music, by Sidney Egan, bass clarinet. The brief, single-movement work does not require an extended-range instrument. Set at a slow tempo, the work does not present the performer with overwhelming technical demands, but is nonetheless a dramatic, effective performance piece. Published loose-leaf to facilitate page turns.

Born in Tipperary in 1944, Irish composer Frank Corcoran studied at Dublin, Maynooth, Rome and Berlin. He was a music inspector for the Irish government Department of Education from 1971 to 1979, after which he took up a composer fellowship at the Berlin Künstlerprogramm in West Berlin. He is the only Irish composer whose Symphony No.1 was premiered in Vienna (1981 R.S.O. Vienna / Lothar Zagrosek).

In the 1980s, he taught in Berlin, Stuttgart and Hamburg, where he was professor of composition and theory in the Staatliche Hochschule für Musik und darstellende Kunst. He was a Fulbright visiting professor and Fulbright scholar in the U.S. in 1989-1990, and has been a guest lecturer at CalArts, Harvard University, U.W. Madison and Milwaukee, Princeton University, Boston College, New York University, N.Y. Fredonia and Indiana University.

His output includes chamber, symphonic, choral and electro-acoustic music, through which he explores particularly Irish issues like language and history. He has worked with text by the poet Seamus Heaney, in the chamber piece Mad Sweeney (1996), and by the Irish-language writer Gabriel Rosenstock. For more details about his current activities, visit his website!

Listen to an interview with the composer: