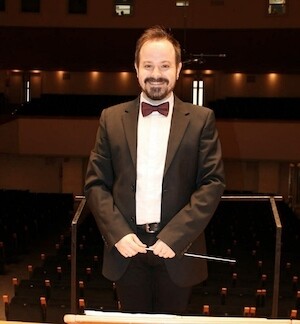 Nebuchadnezzar for solo bass clarinet is the first movement of Blakean Images for bass clarinet and string quartet. The work was dedicated to the bass clarinetist Luis Miguel Moncayo. Each of the piece's three movements is based on an image by the English painter and poet William Blake. In addition, each of the pieces is accompanied by a Proverb of Hell written by the poet himself.

The work requires frequent use of multiphonics, for which the composer provides guidance taken from Harry Spaarnay's book The Bass Clarinet: a Personal History. An extended-range instrument is required.

If you are interested in purchasing the full three-movement work, it is available in either hard copy or PDF download.

Edgar Carrion was born in Valencia, Spain, in 1985. He began his clarinet musical studies at the Los Silos Musical Group in Burjassot at the age of eight. He continued these studies at the Joaquín Rodrigo Conservatory of Music in Valencia and at the Professional Conservatory of Music in Torrente, where he obtained a professional degree in clarinet with excellent qualifications. He combined these studies with the Diploma in Speech Therapy obtained in 2006 from the University of Valencia. His interest in composition, music theory and harmony came to him from a young age, so he began to study piano at the age of fifteen with a view to improving his knowledge of these subjects. For this reason, at the end of his clarinet studies, he began a higher degree in music in the specialty of Composition at the Salvador Seguí Conservatory of Music in Castellón, where he obtained the title of Composition and Instrumentation with honors. He was a student of César Cano, Ferrer Ferran, Voro García, Miguel Ángel Berbis and Claudia Montero among others.
Carrion has taken composition courses with teachers Georg Friedrich Haas, Michael Jarrell, Yann Robin or José Manuel López López among others. As a composer he has received commissions from different instrumental ensembles, as well as from the Valencian Institute of Culture. He has participated as a composer in numerous audiovisual projects, being requested as a composer by Mediaset Spain. In 2014 he was awarded the honorable mention in the Valencia-Crea contest for his ensemble piece Estructuras.
Also interested in conducting orchestras and choirs, he has taken numerous training courses in these specialties led by well-known professionals such as Francisco Melero Joan Espinosa, Francisco Cabrelles or José Rafael Pascual Vilaplana.

At present, he combines composition with teaching tasks and conducting the orchestra and choirs, being a professor of Harmony, Analysis and Band at the Professional Conservatory of Music of Alaquàs, director of the orchestra and choir of the Paternense Musical Center and director of the Burjassot Symphonic Orchestra Los Silos. He is also part of the board of the Association of Composers of the Valencian Community.