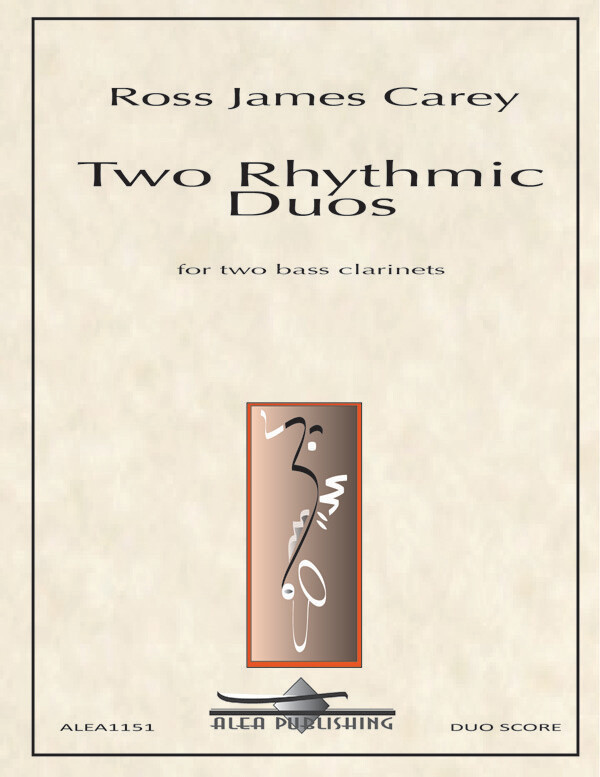 Two Rhythmic Duos focuses on the rhythmic interplay between the two instruments. In No.I, a widely spaced melodic line is explored in a lively, playful manner. No. II's interweaving melodies are formed from a chromatically shifting strict rhythmic canon, creating a degree of tonal ambiguity. Duration 3'40".

Two Rhythmic Duos is an arrangement of Two Pizzicato Preludes for two cello, composed in 2009 in Melbourne, Australia, for New Zealand cellist Rachel Atkinson. This is a companion piece to Two Rhythmic Etudes also for two celli, composed in 2006 for Ukrainian cello duo "Duo Violoncellissimo." This version for two bass clarinets was completed in Cyberjaya, Malaysia in 2016.

Ross James Carey is a composer and pianist. Born in Lower Hutt, New Zealand in 1969, he currently teaches at Lim Kok Wing University of Creative Technology in Cyberjaya, Malaysia. As both a composer and piano soloist and collaborative artist Ross has been active in a variety of settings, from international festivals and conferences to regional and community events, mainly in Australasia and Asia. His compositions draw upon a variety of sources reflecting his background as a classically trained musician active in this region. Ross' compositions have been presented at seven Asian Composers' League Festivals and recordings of his music include those by pianist Yuji Takahashi, guitarist Kazuhito Yamashita, Gamelan Padhang Moncar (New Zealand) and the Black Cedar Trio (California). As a pianist Ross is particularly interested in presenting his own works and those of composers from the wider Asia-Pacific region, and has given recitals at the 'International Congress of Women in Music', Beijing (2008) and 'East meets west' conference at the Hong Kong Baptist University (2009), among others.