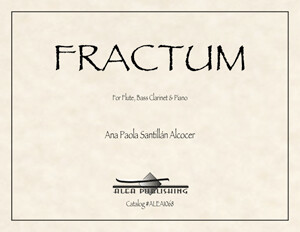 Fractum, a trio for flute, bass clarinet and piano with a duration of approximately 2'30", was written for the Het Trio by Mexican composer Ana Paola Santillán Alcocer in 2003. Fractum is the Latin word for fraction, meaning the separation and division into portions or separable units of a possible whole. The musical fractions of this miniature piece arise from intervallic codes but most importantly from two sets of Tetrachords.

As the result of these sets, two main four-note melodies are constantly interacting in different levels of transposition, rhythms and order, interlaced and juxtaposed by the three instruments throughout the 4 sections of the piece. The first two sections are the introduction of these fractions or portions presented in a fragmented manner in contrast with the last two sections which have the support of quartal harmony and a more flowing, thematic and contrapuntal texture; this way, it becomes evident that these fractions are always wandering and are in fact the representation of the entire piece.

Composer Ana Paola Santillán Alcocer is a native of Mexico City. She began her composition studies at the Centro de Investigación y Estudios Musicales (CIEM) where she studied with Ma. Antonieta Lozano, Alejandro Velasco (Kavindu) and Gerardo Taméz. She holds a Licenciate in Music composition (LTCL) with distinction and the AMus TCL Diploma in Theory, Criticism and Literature from Trinity College London, having studied composition and piano with Vincent Carver. She received her Master of Music degree (magna cum laude) from The Shepherd School of Music (Rice University) having studied composition with Shih-Hui Chen and Arthur Gottschalk, and piano with Jeanne Kierman.

She is the recipient of several awards and fellowships, including first prize at the interdisciplinary competition Spectacle des architectes et compositeurs 2008 (Fontainebleau, France), a Fulbright scholarship, the UNESCO-Aschberg Bursaries for Artists Programme, resident composer at the Virginia Center for the Creative Arts, winner of the Paul Cooper Prize in Composition 2008 (Rice University), 2nd prize in the Josef Dorfman Memorial International Composition Prize 2007 (Michelstadt, Germany), and three selected works at the Foro Internacional de Musica Nueva Manuel Enriquez festival, among others.

Ana Paola's music has been premiered, recorded and/or performed by such ensembles as The Het Trio, the Enso, Camerton and Carlos Chavez String Quartets, Duo Sonoris, Speculuum Musicae, the New York New Music Ensemble, The Woodlands Symphony and the Shepherd School Chamber orchestra, among others.